Cain Refuses To Withdraw From Consideration For Fed Board 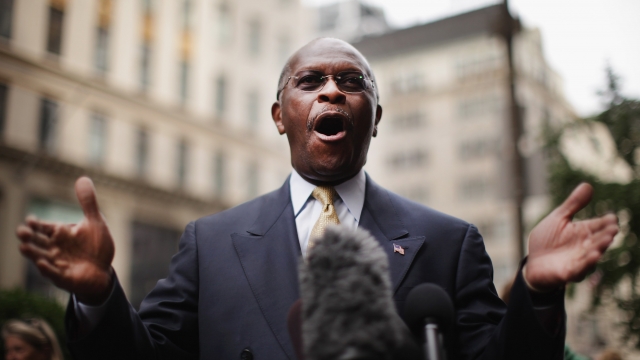 SMS
Cain Refuses To Withdraw From Consideration For Fed Board
By Katherine Biek
By Katherine Biek
April 19, 2019
President Trump is considering Herman Cain for a seat on the Federal Reserve Board.
SHOW TRANSCRIPT

A possible nominee for a seat on the Federal Reserve Board says he will not withdraw his name from consideration.

President Donald Trump announced plans to recommend Herman Cain earlier this month — but as of Friday morning, the official nomination hasn't happened yet.

Cain's comments to Fox Business on Thursday came after a woman who previously alleged she had an affair with the former pizza company executive came forward again.

Ginger White first asserted she'd had a 13-year affair with Cain back in 2011, when he was running for president. Cain was also accused of sexual harassment by several other women during his campaign. He's repeatedly denied the allegations.

But on Thursday, White called on Cain in a press conference to withdraw his name from consideration from the Federal Reserve Board. White's lawyer said her client is ready to testify before the Senate Banking Committee if Cain is formally nominated.

Cain responded by saying, "I am not going to drop out because they are recycling the unfounded accusations."

Four Republican senators have already said they'd vote against Cain. This means that unless Cain were to win support from some Democrats or independents, he wouldn't have enough votes to be confirmed.

Despite this, White House officials told CNN that Cain has President Trump's support and is still in the mix for consideration.