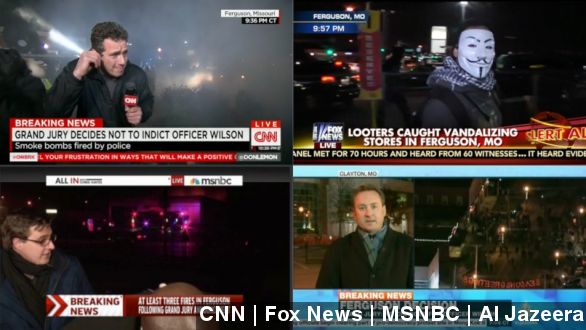 You would have gotten pretty different pictures of the reaction in Ferguson Monday night, depending on which cable network you were tuned into.

CNN tossed first to legal analyst Sunny Hostin, who appeared to disagree with the decision.

"Given all of the conflicting evidence ... it is just clear to me that probable cause did exist," she said.

A similar disappointment on MSNBC and Al Jazeera:

"What we saw from Bob McCulloch was a presentation dressed up as a prosecutor doing the presentation. ... There's no question that Darren Wilson got special treatment," said NBC legal analyst Lisa Bloom.

"I was not that surprised by the verdict," said public policy professor Jeffrey Smith.

"The law of self-defense is favorable to police officers in Missouri, and nationally," said Al Jazeera legal contributor Jami Floyd.

Contrast that to the reaction on Fox News.

"Were you impressed by the prosecutor and how he laid out the diligence?," asked one host.

"He was very dignified. I thought McCulloch did an excellent job. He was very measured," added another.

All the big cable news networks — Fox News, CNN, MSNBC and Al Jazeera — dug into continuous Ferguson-only coverage starting with the announcement of a grand jury's decision not to indict Darren Wilson. And all had varying on-the-ground perspectives.

At 9:03 p.m., about 10 minutes after McCulloch left the podium, Al Jazeera went to a live shot in Clayton, Missouri, where McCulloch made the announcement.

"It's very quiet right now. There are some people over to my right, but everyone is being very respectful and peaceful."

While other networks, like CNN and Fox News, cut to frantic reporters in Ferguson.

"Anderson, hear you," a reporter for CNN said. "Anderson, I hear you. Just had a few tense moments."

MSNBC, by and large, did not send reporters with camera operators inside the protests but rather had them phone in and describe the scenes.

"We actually just left the crowd, me and my team. ... Over the last 40-45 minutes, there was about half a dozen bottles or so tossed at officers," an MSNBC reporter said.

And then there's what all the coverage had in common. The networks with video crews in the thick of the protests often saw run-ins with both police and protesters.

It's what Mediaite's Joe Concha called "must-see-TV for all the wrong reasons."

About 30 minutes after that report from CNN, a Fox News crew saw its camera destroyed by protesters.

"What about all these people that have these masks on like that guy? How many people are covering themsel — uh oh," Sean Hannity said.

While CNN and Fox News had a flurry of reporters with camera crews on the ground, MSNBC's Chris Hayes anchored the majority of live coverage in Ferguson for his network. Again, about 30 minutes after Fox News' incident, he too faced issues.

"We're hearing some more of what sounds like gunfire nearby," MSNBC's Chris Hayes said. "We're being told to fall back. I'm going to throw to you in the studio."

Another common sight was every network's side-by-side video of President Obama's address. As Obama called for calm in Ferguson, the videos showed the early stages of clashes between protesters and police.

According to local station KSDK, 61 people were arrested and 25 structure fires were reported in Ferguson overnight.