C-Section Births Have Surged To 'Striking' Levels Around The World 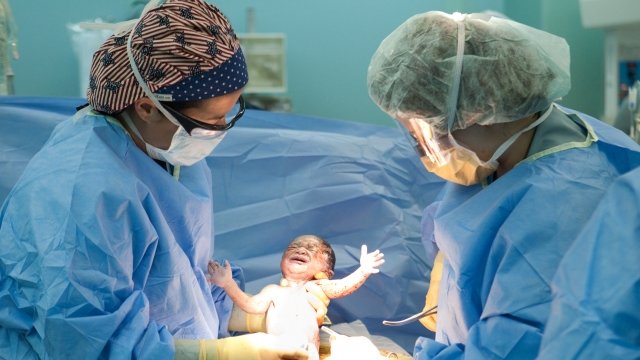 By Briana Koeneman
October 12, 2018
Research published in The Lancet says the amount of C-section births worldwide surged from about 16 million in 2000 to 29.7 million in 2015.
SHOW TRANSCRIPT

The number of babies born via cesarean section around the globe nearly doubled between 2000 and 2015 — and experts are calling it alarming.

After studying data from 169 countries that include more than 98 percent of the world's births, researchers determined the amount of C-section births worldwide surged from about 16 million to 29.7 million in that 15-year period.

The researchers note C-sections can save both mother's and babies' lives in medically necessary situations. But they're concerned about a rise in UNNECESSARY C-sections because the surgery can create some serious side effects like infection, bleeding and increased risks during future pregnancies.

One of the study's authors told CNN, "We knew that globally, C-section rates were increasing for quite some time now, but that now more than one in five babies are delivered by C-section is striking."

The study comes not long after the World Health Organization published new guidance to address the QUOTE"sustained and unprecedented rise" in C-section rates across the world. The guidelines are specifically designed to reduce unnecessary C-sections and cut down related risks to women and babies.