C.J. Cregg From 'The West Wing' Fills In At White House Press Briefing 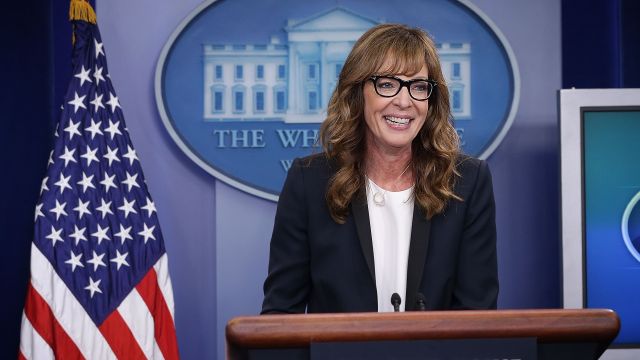 "Josh is out today. He has, I believe it's a root canal?" Allison Janney said in character at the White House on Friday.

C.J. Cregg of "The West Wing" (aka Allison Janney) just filled in as White House press secretary. For real.

"First, the president is still working on his jokes for the White House Correspondents' Dinner," Janney said. "I don't have any details on that other than he intends to be funny."

Of course, there were callbacks.

"And second, it is Friday, which means at half past 5, I will be performing 'The Jackal' in my office for anyone who is interested or remembers or cares," she said.

Janney and actual press secretary Josh Earnest shared an awkward moment. But Janney was really there to draw attention to the opioid epidemic. An estimated 2.1 million people in the U.S. suffer from substance use disorders.

"This is a disease that can touch anybody," Janney said. "And all of us can help reduce drug abuse through evidence-based treatment, prevention and recovery."

This video includes clips from Warner Bros. Television / "The West Wing" and The White House.