Report: US Considering Charging Certain Immigrants To Apply For Asylum 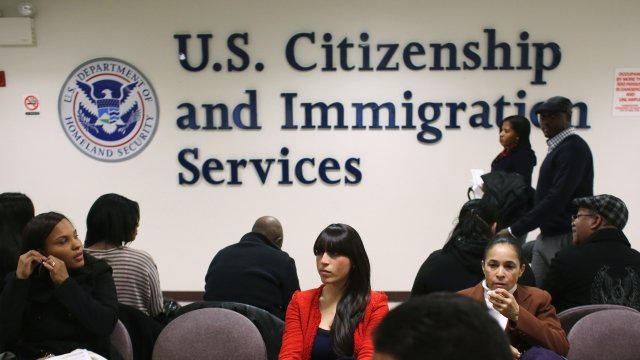 By Ben Schamisso
December 6, 2018
BuzzFeed News reports a potential $50 fee would only apply to asylum-seekers already in the U.S.
SHOW TRANSCRIPT

The White House is considering charging applicants already living in the U.S. a $50 fee to apply for asylum. That's according to a BuzzFeed News report citing "sources close to the administration."

The proposed fee would reportedly affect those who are already in the U.S. and are applying for asylum the "affirmative way." That means it wouldn't affect those seeking asylum at official border crossings or those making an asylum claim during deportation proceedings. Still, critics argue the move would go against the nation's values.

A former immigration official who's now an advocate told BuzzFeed News: "These are people fleeing something and looking for protection from us. … For us to turn around and say, 'that's nice, we'd like to help, but you'd have to pay a fee' seems contrary to the point."

It should be noted that the government agency that processes affirmative asylum cases and most other types of immigration cases is funded primarily by fees collected from applicants. For example, immigrants applying for a green card or a work permit typically have to pay a filing fee — generally around a few hundred dollars.

But those applying for humanitarian visas do not usually have to pay a fee.

The agency, U.S. Citizenship and Immigration Services, or USCIS, is also required by law to review its fees every two years and adjust them according to the agency's needs and costs.

And as the backlog of pending affirmative asylum cases is quickly getting worse, the agency may be hoping added revenue will help speed up the process. Right now, most affirmative asylum applicants have to wait between two and five years for an interview.

A fellow at the Center for Immigration Studies, a group that advocates for immigration restrictions, told Newsy the potential $50 fee would be "more than reasonable" considering the benefits that come with obtaining asylum. Besides, he said, "What family member or friend would not provide money for such a fee if the alternative would be to see a loved one face persecution?"

USCIS officials have not commented on the reported draft regulation. While the majority of countries across the globe don't charge an asylum fee, Australia, Canada and Switzerland do, under certain circumstances.