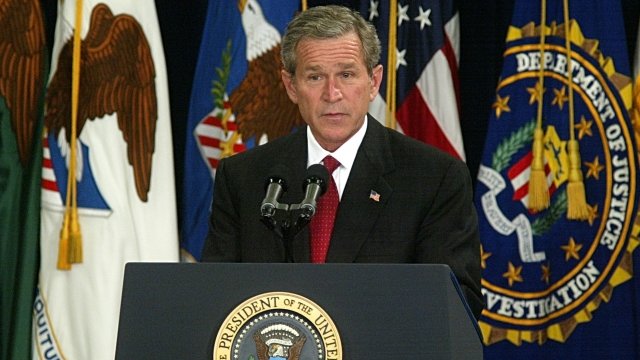 President George W. Bush took a crack at it ... and it didn't work out that well.

President Trump's tariffs on steel and aluminum products is pretty broad and may even seem completely unprecedented to some. But this is not the first time a president has tried this approach.

In 2002, in an attempt to revive the steel industry, President George W. Bush imposed temporary tariffs on steel imports of up to 30 percent. At the time, the president said the tariffs would "help steelworkers, communities that depend on steel, and the steel industry adjust without harming our economy."

In retrospect, most people agree Bush's tariffs didn't really have the positive impacts that were promised.

"If you increase the price of steel, then that has an impact on a whole bunch of other industries," Victoria Guida, a financial services reporter for Politico told Newsy.

One study from January 2003 found the steel industry temporarily added about 3,500 workers, but the costs of those jobs came back and hit consumers at an increase of $400,000 per job.

"Not only were consumers paying more money, but also people in other sectors were actually losing their jobs because of this," Guida said.

A study done on the tariffs in 2003 found those tariffs cost 200,000 jobs, which was more than the entire employment within the steel industry at the time in some of our biggest states.

"Like California and Texas and Ohio and Michigan — places where you would expect the benefits to want to go because that's where the most people are," Guida said.

The impacts weren't just domestic. Japan and the European Union both threatened to retaliate with tariffs of their own on American goods.

The president signed import tariffs on steel and aluminum on Thursday, and some lawmakers spoke out against the measure.

"In the wake of the Sept. 11, 2001, attacks, a lot of countries had built up a lot of goodwill toward the Americans and that sort of put a dent in that because all of a sudden, the Americans were sort of willy-nilly putting tariffs on everyone regardless of whether they were seen as good actors or bad actors," Guida said.

Eventually, more than a dozen countries went to the World Trade Organization and challenged the tariffs and ultimately found they didn't follow global regulations.

Dan DiMicco, a Trump campaign adviser, disagrees with the findings of those reports. He told Politico: "There was no harm to any other industry. No harm. Zero job losses. Anybody quoting anything different to you is making the numbers up," adding the tariffs gave the steel industry time to get stronger and restructure.

But it seems like the Bush administration would disagree. After just 18 months, the tariffs were completely rolled back.