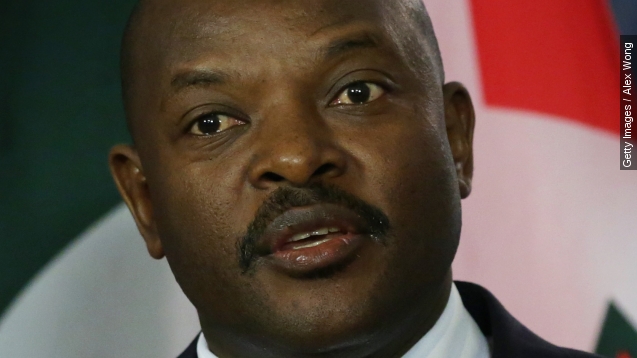 Burundi hardly has any money or infrastructure. Their best hope may be foreign investment in nickel mining, but political crises hamper any help.

In Burundi, the world's second-poorest country based on per capita GDP, the economy was beyond bleak even before all this.  (Video via Voice of America)

Cyclical poverty has haunted the country since the eruption of a 12-year civil war in 1993, which left Burundi with hardly any money and little infrastructure. Burundi's best hope for the future lies in two places: across the sea and under the ground.

Burundi houses about six percent of the world's nickel reserves with one of the 10 largest undeveloped nickel deposits in the world. Even though nickel is down in world metal markets, this kind of resource could help get the country a little bit of revenue to help the economy and ease poverty— if Burundi had the resources to start mining. (Video via Victory Nickel)

In short, Burundi is so poor that it doesn't have enough money to start making money, which is why it needs help from foreign investors like the Kermas Group.

The Kermas Group, based in the U.K., is the majority owner of Burundi Mining Metallurgy, a South African company that purchased a Burundi mining site in 2014.

That mine will also be 15 percent owned by the Burundi government, meaning that some mining revenue will finally start flowing in the country's budget, even if most of the money is going back to Britain and South Africa. (Video via CCTV Africa)

The foreign owners of the site will also provide the cash to build energy resources. Even independently owned mines that employ Burundians can help inject some money into the economy.

Burundi has been trying desperately to attract foreign investment for a few years now, offering tax exemptions and investment incentives to companies who buy land and employ Burundi workers.

But again, that process has been stalled by civil unrest.  Investors are rarely looking to enter a market where the government is as tenuous as Burundi's— and May's unsuccessful coup attempt didn't do much to reassure the international community.

Belgium, Burundi's former colonial ruler and biggest international donor, has threatened to cut off aid to the country if Nkurunziza runs for a third term, which figures to make the country's economic prospects even worse.

Burundi is also prone to some of the intense ethnic divisions that have plagued nearby countries like Rwanda and Uganda, which stoke fears of terrorism and possible genocide. (Video via Al Jazeera)

So, while political unrest continues to throw Burundian politics into chaos, it also scares off foreign investment in the country— which may be Burundi's best hope for a recovery.

This video includes images from Getty Images, Christine Vaufrey / CC BY 2.0, and Dave Proffer / CC by 2.0.