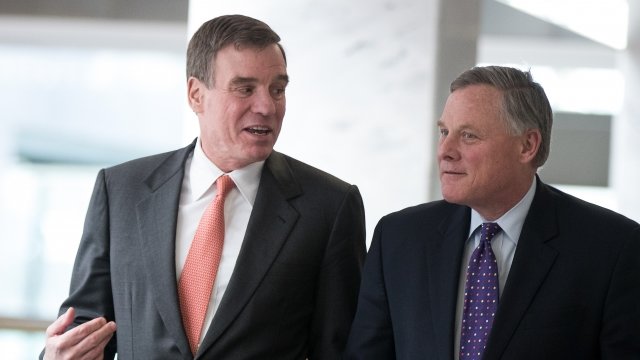 The Senate Intelligence Committee's investigation into Russian meddling is still ongoing, but its two committee leaders just made one thing very clear — they think the intelligence community's initial report was spot-on.

In a joint statement released Wednesday, committee chairman Sen. Richard Burr said, "There is no doubt that Russia undertook an unprecedented effort to interfere with our 2016 elections." And vice chairman Sen. Mark Warner said, "The Russian effort was extensive, sophisticated, and ordered by President Putin himself for the purpose of helping Donald Trump and hurting Hillary Clinton."

This statement is important because the House Intelligence Committee's final report cast doubt on that same assertion.

The House report said most of the intelligence community's assessment was correct. But the report disputed the conclusion on "Putin's strategic objectives" — or the claim that Putin wanted to ensure a Trump presidency. It said the ICA didn't meet intelligence standards in drawing the conclusion.

The Senate Intelligence Committee isn't done yet. Staff still needs to finalize the report and get any classified information redacted before it can be publicly released.