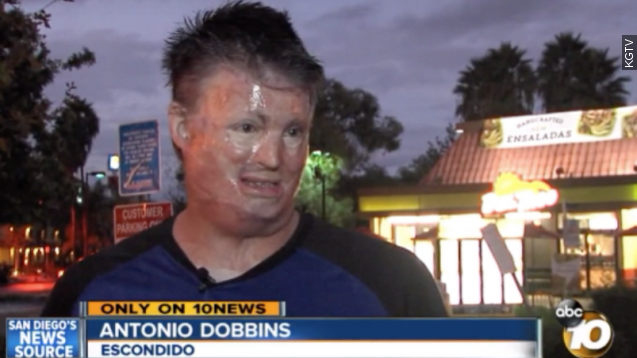 "That actually made me cry — that people out there actually think like that," Antonio Dobbins told KGTV.

That's Antonio Dobbins, a California man who says he was hurt by what a Del Taco employee said to him in September.

According to Newsy's partners at KGTV, 50-year-old Dobbins was in a work accident and suffered "third- and fourth-degree burns on his face and hands."

But that accident happened 20 years ago. So when Dobbins and his daughter stopped by a Del Taco in Escondido, he was shocked by what he heard.

"Typically, girls wouldn't go out with a guy that looks like you," Dobbins said.

"Dobbins said the employee even asked to take a photo of him to show his friends," a KGTV reporter said.

Dobbins reported the incident to the manager of the Escondido location who later told KGTV that Del Taco's corporate headquarters is investigating the case. (Video via Del Taco)

Dobbins says both he and his daughter are owed an apology.

"I think if a company hires someone, you need to teach them how to say the right things to people coming," Dobbins said.