This Gator Swam Around With A Python In Its Mouth, Because Florida 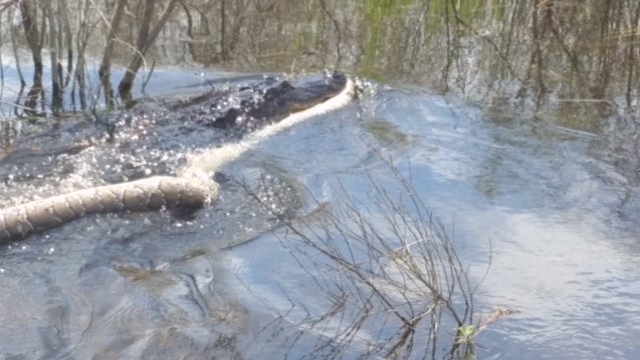 Pythons have become an invasive species in the Everglades over the past few decades.

If you needed another reason to avoid alligators, this is it: This alligator is swimming along with its lunch — a full-grown Burmese python.

Burmese pythons are actually a huge problem in the Florida Everglades. And since wildlife management can only do so much, it looks like nature is lending a hand.

Burmese pythons are native to Southeast Asia, but over the past few decades they've become an invasive species in Florida, likely because people are releasing their pets into the wild.

The massive reptiles can grow to more than 20 feet long and weigh up to 200 pounds.

In Florida, pythons are predators to raccoons, opossums and even bigger animals like the Florida panther.

And scientists fear the python's hunting patterns will eliminate some native species and have adverse effects on the Everglades.

So every year, the area puts on a monthlong Python Challenge. This year, hundreds of hunters came out, and 106 pythons were captured and killed.

And for all the snakes those hunters couldn't catch, it appears the alligators are taking over.