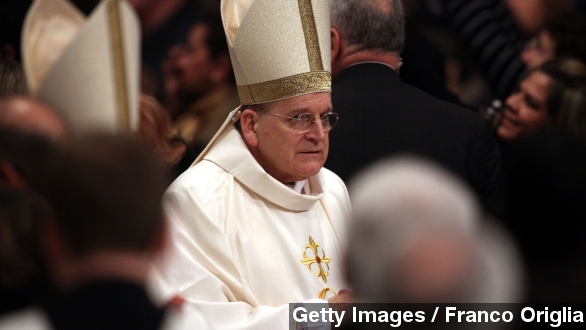 Pope Francis's removal of the highest-ranking American representative at the Vatican from his post has left the church without any Americans in prominent roles in Rome.

Cardinal Raymond Burke served as chief guardian of canon law and is well known in the church for his hard-line conservatism. He has repeatedly spoken out against Pope Francis who has garnered a reputation for progressivism. (Video via Catholic News Service)

In fact, less than a month ago, Burke told Spanish magazine Vida Nueva, "There is a strong feeling that the church is like a ship without a rudder."

But Burke's attracted the most attention before that, when he emerged as the lead critic of a report that came out of the Synod on the Family which said homosexual people have unique gifts to offer the church. (Video via The Vatican)

Although Burke's removal only became official Saturday, it had been a long time coming.

In fact, Burke told Buzzfeed in mid-October he was aware of plans to demote him and re-assign him to the largely ceremonial post as patron of the Sovereign Military Order of Malta, which happened Saturday.

Despite its name, the Sovereign Military Order of Malta is actually a charitable organization run by the church, which provides medical aid across the globe. (Video via Rome Reports)

As Crux reports, although not unexpected, removing Burke from his post on what is essentially the Vatican's supreme court is rare. "Although not unheard of, it’s unusual for a pope to remove an official from a position such as the one held by Burke without assigning him similar responsibilities."

Burke had previously served as the archbishop of St. Louis, and attracted attention during his tenure when in 2004, he tried to ban John Kerry from taking communion because of his pro-choice stance.

Burke will be succeeded by French archbishop Dominique Mamberti.