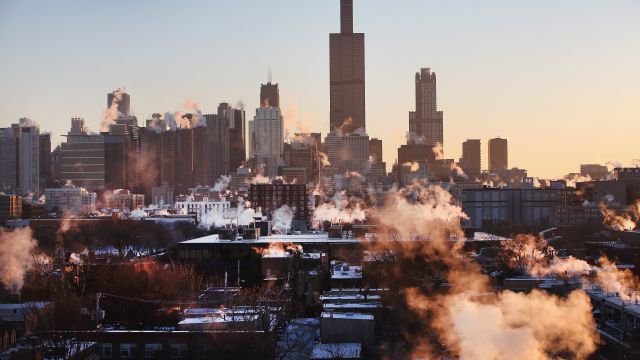 "The majority of emissions that come out of cities come from buildings," said Karen Weigert, Senior Fellow for Global Cities at The Chicago Council on Global Affairs. "It comes from heating, cooling and operating the places where we live work and play."

Most of those greenhouse gas emissions come from indirect sources, like power plants, and inefficient buildings will need more of that energy.

In Chicago, 71 percent of carbon emissions came from operating buildings in 2010. In New York, it was 75 percent.

"So if you want to address that, you have to use less, and then what you do use, you have to use green," Weigert said. "Those are, at a very high level, the two things that you need to do about your building."

"If you think about a building and you want to make it more efficient, well to do that you have to do some construction on that building or make operational changes," she said. "That creates jobs right there, lower operating costs for the building again right there."

"So, yes, absolutely — aggregating up what you do in your home and what your neighbors do in their homes — those actions combine to then reduce energy use," Weigert said.

"And then you're going after the biggest source of carbon emissions from a city," she said.

This video includes a clip from gregg.smith@overlookfs.com / CC BY 3.0.