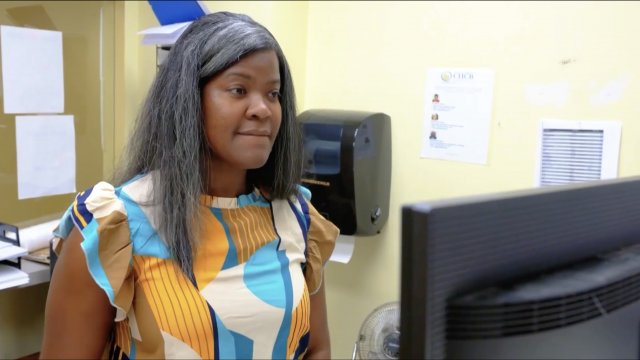 As Dr. Kenyani Davis makes her rounds at the Community Health Center in Buffalo, New York, she is still trying to process it all, after a mass shooter murdered 10 members of the neighborhood she serves.

"It's a community that got affected, especially when you're talking about a hate crime," Dr. Davis said. "It was every emotion at once."

In the days that followed the shooting at a Tops supermarket, her team got to work — something they have always done.

Across the city, other organizations recognized the need for mental health services, too.

"We were in the crowd with the community in front of Tops praying, crying, just being there, an ear for them to to express themselves," said Melissa Archer, New York Project Hope program coordinator.

When it came to treatment, Archer, a psychiatric nurse practitioner, noticed people on the city's east side, made up of mostly Black residents, were hesitant to seek help.

"People want to see people that look like them so that they don't have to explain certain things they feel," Archer said.

According to the Substance Abuse and Mental Health Services Administration, only 1 in 3 Black adults with mental illness receives treatment.

The National Alliance on Mental Illness says that's mostly due to socioeconomic challenges, stigma surrounding mental illness and mistrust of the medical industry. Black people are often victims of health care bias when those providing the treatment lack cultural awareness.

"I think one of these things that this event has shed light on and empower people to do is to speak the truth," Dr. Davis said. "When we were there, we had people saying, 'We are angry at White people.'"

For community leaders in Buffalo, that meant offering more counselors with shared experiences and cultures.

Part of the healing process means meeting people where they are, and for some mental health professionals, that meant setting up shop two minutes from where the incident took place.

The Buffalo Urban League team says the numbers have increased since moving into the neighborhood and making more Black counselors readily available, all thanks to temporary funding from FEMA through New York Project Hope.

According to the U.S. Census Bureau, the number of racial/ethnic minorities within the psychologist workforce more than doubled between 2000 and 2019, increasing 166%. However, researchers predict that increase will still be inadequate to meet the demands of minority patients.

In the meantime, doctors there say they'll continue to stand in the gap for as long as possible.