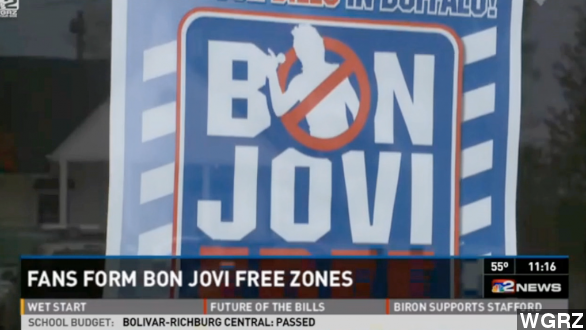 The easiest way to get yourself in trouble in western New York? Just try to play this guy's music in front of Buffalo Bills fans. (Via Flickr / Sasha Azevedo)

WKBW ANCHOR: "A group called 12th Man Thunder is pushing a boycott of all things Bon Jovi because it believes the rock star would move the team to Toronto if he bought the team."

The group 12th Man Thunder is a grassroots campaign asking Bills fans to boycott the rocker's music. Its petition not only has more than 6,000 signatures as of early Thursday, it boasts a long list of businesses banning the music from jukeboxes and live bands.

The group is not shy about its newfound hatred for Bon Jovi, whose publicist said last month he had an interest in buying the team. (Via The Island Def Jam Music Group / Jon Bon Jovi)

WGRZ REPORTER: "What would you say to Bon Jovi if he walked into your bar right now? Would you serve him a beer?"

JAGIELLO: "No, I'd tell him, 'Look, do what you know and open a hair salon and leave football alone.'"

WIVB REPORTER: "The group says Bills fans will refuse to attend games if the team moves."

CHARLES PELLIEN, CO-FOUNDER OF 12TH MAN THUNDER: "People in Toronto are counting on our money to go up there and fill their seats, and it's a losing proposition for Bon Jovi because we're not going to be there."

​It's been a rough couple of months for loyal Bills fans after the death in March of beloved owner Ralph Wilson, who founded the team in 1959. (Via WHAM)

When Bon Jovi's publicist announced his interest in the team in April, news followed quickly the musician and a group of investors had a long-term plan to include moving the team to Toronto. (Via USA Today)

Earlier this month, NFL Commissioner Roger Goodell said he believed the team needed a new stadium to keep it viable in the region. Ralph Wilson Stadium was built in 1973. (Via ESPN)

While the team's lease with the local county and state of New York pretty much locks it into playing in the current stadium through 2019, the Bills' CEO announced a transaction team Wednesday effectively putting the team on sale. (Via Buffalo Bills)

The Toronto Sun reports other buyers have emerged like the former owner of the NHL's Buffalo Sabres, Tom Golisano, who many believe would keep the team in western New York.