Buffalo Billion? Why An NFL Franchise Is Getting Low-Balled 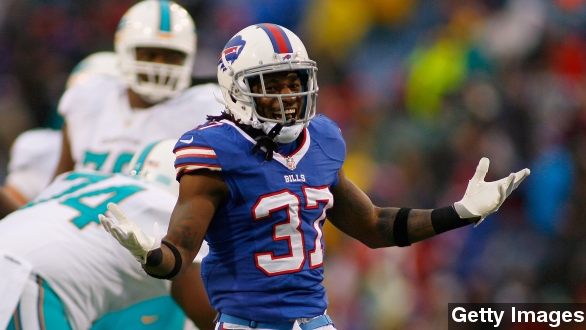 SMS
Buffalo Billion? Why An NFL Franchise Is Getting Low-Balled

By Cliff Judy
August 11, 2014
Western New York is now under heavy pressure to build the Bills a new stadium (and an implied threat they'll lose their team if they don't).
SHOW TRANSCRIPT

With the shot at owning a team in a league so popular it seemingly prints its own money, who wouldn't want to take the ball and run with it? Well, the bidders themselves, apparently.

Forbes' Mike Ozanian reported Sunday of the three groups he confirmed as submitting bids to buy the Buffalo Bills, none of them offered $1 billion. Ozanian wrote, "What an embarrassment for the NFL and the investment bank hired by the estate of the late Ralph Wilson to sell the football team."

To put that in perspective, Ozanian noted the average NFL team is valued at $1.17 billion, and the Cleveland Browns — a historically terrible team in a midsize market — sold for $987 million two years ago.

While a billion dollars seems like the kind of spending money none of us could ever dream of, the NFL is likely looking at that as chump change. NFL Commissioner Roger Goodell has a stated goal of nearly tripling the league's annual revenue to $25 billion in the coming years.

The team went on sale this spring after the death of beloved owner Ralph Wilson, who founded the team in 1959. (Video via WHAM)

Since then, the likely suitors lining up to buy the franchise have included such names as Donald Trump and Jon Bon Jovi. So why doesn't anyone want to pony up 10 figures when profit seems likely? (Video via The Island Def Jam Music Group / Jon Bon Jovi)

The biggest reason is likely the stadium that bears the deceased owner's name. Ralph Wilson Stadium more resembles a college venue than the newer NFL stadiums that cost several hundred million dollars minimum to build, much of that often footed by taxpayers. The stadium did just get a $130 million renovation this offseason. (Video via Buffalo Bills)

But NFL Commissioner Roger Goodell has made no secret he wants a new stadium in Buffalo, and many have interpreted that as an implied threat to help the Bills leave western New York if the team doesn't get one. (Video via YouTube / David Spada)

After all, Toronto — a much larger city and taxbase — is only just across the Canadian border and has been rumored as a landing spot for the Bills. Buffalo is one of several NFL cities dealing with such implications.

The owner of the St. Louis Rams caused panic for Rams fans when he bought 60 acres of land in Los Angeles following a failed attempt to get his stadium $700 million in renovations. San Antonio's city manager confirmed she met with the Oakland Raiders owner last month as that team calls for a better venue.

The Buffalo News reports a late July deadline to get bids in for the Bills has been extended. A source told the newspaper, “The family is still seeking the most money, so they’re still bringing people to the table."