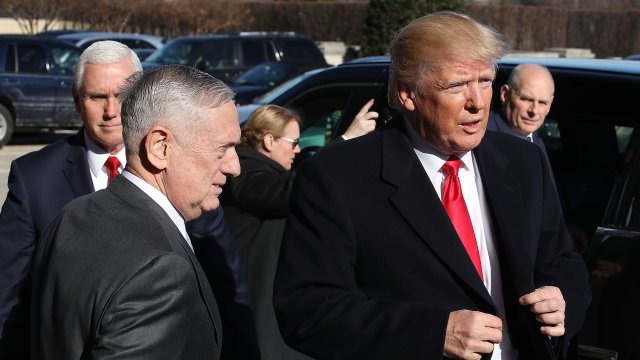 SMS
The White House Budget Proposal Includes $18 Billion For A Border Wall
By Gabrielle Ware
By Gabrielle Ware
February 12, 2018
If the proposal were approved, it would mark the biggest defense funding boost since the Reagan administration.
SHOW TRANSCRIPT

He's requested $716 billion, which would reportedly be the largest military buildup since the Reagan administration.

About $18 billion of that is earmarked for building a border wall. Trump previously suggested a path to citizenship for undocumented immigrants but made clear he wouldn't consider it without securing funding for a wall.

The budget would also buy new warplanes, bombs and missiles, and generally modernize the U.S. arsenal amid increasing threats from Russia and North Korea.

But some analysts are worried that dumping too much money into defense will lead to unwise spending.

Todd Harrison of the nonpartisan think tank Center for Strategic and International Studies told USA Today: "The Department of Defense is still in desperate need of reform in many areas. If [it] does not continue to reform and make smart cuts even when the budget is growing, it will just get fatter, not stronger."

Like most presidential budgets, Trump's proposal will likely be reworked before becoming law.