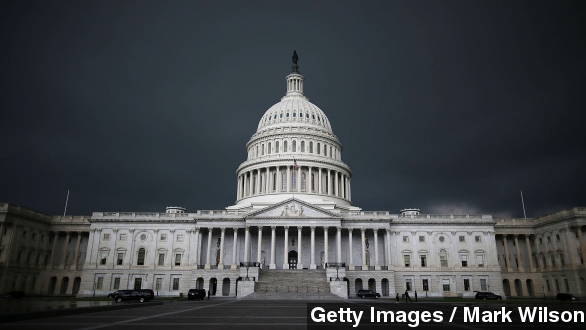 After racing against the clock, the House of Representatives has passed a spending bill 219-206 to keep the government funded for another year.

It was an embarrassing and politically damaging moment which Congressional leaders have sworn to avoid this time. On Thursday, the House narrowly passed a $1.1 trillion compromise funding bill which would keep the lights on until next September.

But the compromise bill didn't make it through without a fight.

"Here we are in the House being blackmailed to vote for an appropriations bill," House Minority Leader Nancy Pelosi said.

The bill faced concerted Democratic opposition before making it through the House Thursday, forcing Speaker Boehner to postpone a final vote until he could shore up support for the measure.

The Democratic revolt stems from a last-minute provision rolling back parts of the Dodd-Frank law which reformed financial regulation in the wake of the Great Recession. The new provision allows banks to use federally insured funds to engage in risky derivatives trading — potentially putting taxpayers on the hook for lost funds.

The surprise provision infuriated many progressives.

"What the Republicans did was they pushed a bunch of terrible financial bills into the negotiations. ... This is the provision that stayed, and it is a real stinker," Senator Elizabeth Warren told MSNBC.

And on the other side of the debate, hardline conservatives criticized the House leadership for not trying to defund President Obama's controversial initiatives: Obamacare and the recent executive action on immigration.

The fractured opposition has both parties scrambling for votes. Even President Obama has gotten involved, making personal calls to try and whip up Democratic support for the bill in the Senate.

"This compromise bill merits bipartisan support on Capitol Hill, and hopefully will arrive on the President's desk in the next few days. And if it does, he will sign it," White House Press Secretary Josh Earnest said.

The bill now heads to the Senate for consideration. House lawmakers also passed a continuing resolution to extend the shutdown deadline for a few days, giving the Senate time to debate the proposal.