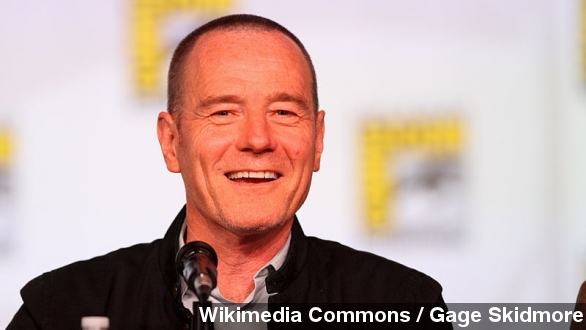 "Breaking Bad" signed off for good a little more than six months ago, but Walter White is still out there. What has he been up to? Helping a high school student ask a girl to prom.

"If you don't go to the prom with Stefan, then maybe your best course of action would be to tread lightly."

"Maddie, would you go to prom with me?" (Via YouTube / Stefan Montana)

Bryan Cranston was signing autographs after a performance of a Broadway production of "All the Way" when Stefan Montana approached him asking if he would help him ask Maddie to prom. (Via YouTube / Heather DiBianco)

The New York Daily News reports Montana and his family were in New York visiting colleges and decided to stop and say hi to Cranston after one of his shows.

Montana told the paper: "He really is the nicest guy in the world. It really is true. He's not really a celebrity, he's a dude. He didn't have to help me out but it was pretty amazing."

ABC dubbed high-profile prom date requests like this one a "promposal," and a lot of guys out there are trying to step up their game to get a "yes."

"There is a sense of wanting to out-do other kids. These promposals inspire creativity and thoughtfulness."

"Teens are going all-out to plan epic stunts to get their dates to say yes."

Like this one, in which a guy named Dylan asked Caitlyn to prom at the end of a fake college rejection letter. The picture of the letter has gone viral in the last couple weeks. (Via The Huffington Post)

Or when Zach got a police officer's help. The officer wrote Reagan a fake ticket, and on the back of the ticket, Zach asked Reagan if she would go to prom with him. (Via YouTube / Zach Taylor)

As for Montana, he now has a date to his junior prom thanks to some star-studded help. He told the New York Daily News it might be tough to outdo himself for senior prom next year.