Bruno Mars Might Bring The Funk To The Super Bowl ... Again 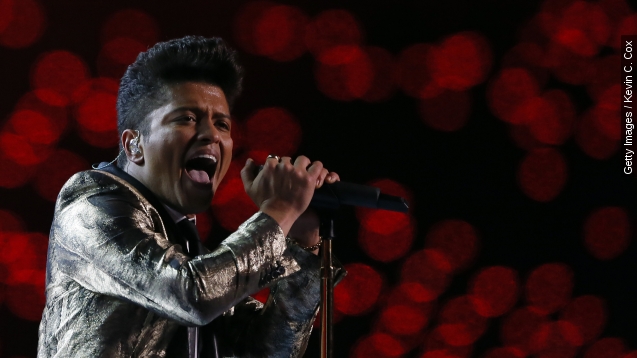 Bruno Mars might be the main event at the Super Bowl 50 halftime show, which would make it his second Super Bowl performance. That's a rare honor.

For the Super Bowl's Golden Anniversary — so, the game's 50th anniversary — the NFL might return to a tried and true halftime show success: Bruno Mars.

That's what our favorite funky performer said when he confirmed he would be performing on the 2014 halftime show, so we can only imagine how much celebrating is going on now.

His 2014 performance with the Red Hot Chili Peppers was the most-watched halftime show ever — until Katy Perry's set this year.

Being invited back to perform at Super Bowl 50 is a really big deal.

So big of a deal, actually, only two other modern-day musicians have returned for another performance.

We say "modern-day" because the massive concerts weren't always the norm. Up until 1991, when New Kids on the Block performed, it was more common to see a university marching band take over the field than it was to see a popular singer.

And technically, there are three people who have been asked back multiple times: Gloria Estefan, Justin Timberlake and Nelly.

But JT doesn't count because — as any true *NSYNC fan knows — there is a distinct difference between *NSYNC Timberlake and the pop megastar he's become.

Nelly performed in 2001 and 2004, which are the same years JT performed. Nelly never actually headlined the show, but he was part of two of the most memorable halftime shows ever. (Video via Universal / Nelly)

After all, the 2001 *NSYNC performance also included JT's girlfriend at the time — Britney Spears (hello, nostalgia) — and Aerosmith.

If Mars accepts the offer, it's probably safe to assume Mark Ronson will be one of the guest performers so the two can perform "Uptown Funk" together.