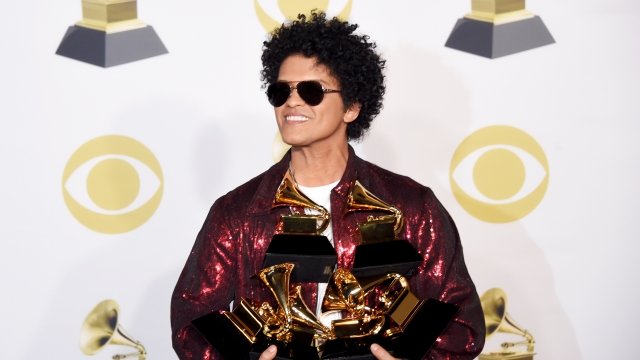 Bruno Mars swept the board at the 2018 Grammy Awards.

The "24K Magic" singer won all six awards he was nominated for, including some of the biggest categories like song, record and album of the year.

Mars' album "24K Magic" also won for best engineered album. But that prize is awarded to the engineers who worked on it.

Many were hoping a hip-hop artist would win that last category. Mars was up against records by Jay-Z, Childish Gambino, Kendrick Lamar and Lorde.

A hip-hop artist or group has only won the Recording Academy's top prize twice before — Lauryn Hill first did it in 1999, followed by OutKast in 2004.

Lamar did end up being the night's second-biggest winner, though. He took home five Grammys, including one for best rap album.

Meanwhile, Alessia Cara was the only female artist to receive an award during Sunday's televised ceremony. She won best new artist.