Browns' Josh Gordon Suspended At Least One Year Without Pay 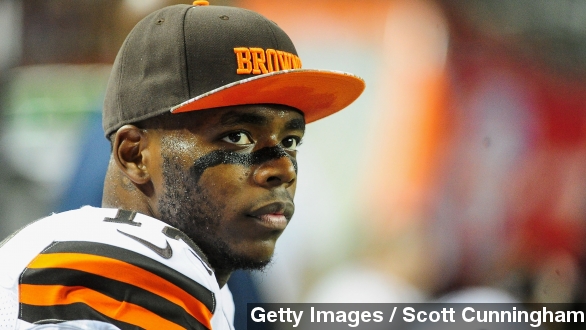 Tuesday, the NFL suspended Browns wide receiver Josh Gordon for at least one year without pay for violating the NFL's substance abuse policy. It stems from yet another failed drug test from Gordon — this time for alcohol in January. (Video via Cleveland.com)

The league's new substance abuse guidelines restricted Gordon from consuming alcohol for the entire 2014 season because of his previous drug violations.

Browns general manager Ray Farmer released a statement saying, "We are disappointed to once again be at this point with Josh. Throughout his career we have tried to assist him in getting support like we would with any member of our organization. Unfortunately our efforts have not resonated with him."

Gordon has been suspended during each of his first three years in the league for his off-field troubles, including arrests and suspensions for both alcohol and marijuana.

It's enough baggage to make ESPN's Jeremy Fowler speculate Gordon's days in the NFL — not just Cleveland — could be numbered.

"It could be the end of Josh Gordon in the NFL. He's suspended for a year and he's going to have to reapply for reinstatement and show that he's clean during that process, so it's going to be a long year for him to get that done," ESPN's Jeremy Fowler said.

Plus, one NFL source tells Yahoo Sports writer Charles Robinson the Browns are already looking for ways to cut ties with Gordon. The source says the former Pro Bowl wide-receiver "no longer factors into any plans."

Outside of his off-field behavior, Gordon's talents on field will be missed. He made it to the Pro Bowl in 2013 and lead the NFL that season with more than 1,600 receiving yards — 11th best in NFL history.