'Holy Grail' Of Weight Loss? New Find Could Be It 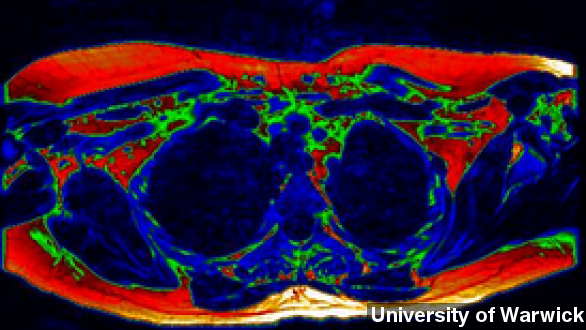 SMS
'Holy Grail' Of Weight Loss? New Find Could Be It
By John O'Connor
By John O'Connor
April 18, 2014
In a potential breakthrough for future obesity treatments, scientists have used MRI scans to pinpoint brown fat in a living adult for the first time.
SHOW TRANSCRIPT

Most people desire to have a little body fat as possible, but researchers have found there may be one type of fat you want a little more of.

In what could be a major breakthrough for future obesity treatments, scientists in the United Kingdom have used an MRI scan to pinpoint brown fat in a living adult for the very first time. (Via CBS)

“What most of us imagine is ‘fat’ is actually white fat, which stores [excess] energy and increases in size, [leading to] obesity. But there is another type of fat: brown fat ... it does is the complete opposite. Instead of storing energy, it actually burns off energy, and in that process, it releases heat.”

If you look at this image, which shows the upper chest of a person as if viewed from the feet, you'll see that the green areas represent places of potential brown fat. Previously, it had only been found in the shoulders of newborns. (Via The Huffington Post)

The finding is significant for the development of future weight loss methods.

This is because it's currently believed a sugar cube size of brown fat, if activated properly, could burn about six to nine pounds of white fat in a year. You know, the bad stuff you spend hours in the gym trying to work off.  (Via ABC)

There are currently no existing weight loss therapies focusing on brown fat, but one the study's author says if a treatment could be developed, it might be the, quote, "holy grail" of weight loss. Basically, you'd be able to burn bad fat without exercising.

The New York Times explains there are some issues though — leaner people likely have more brown fat, while obese people have less. Younger people also have more than older people, and women have more than men.

Scientists say the key will be figuring out maximize these stores of fat.