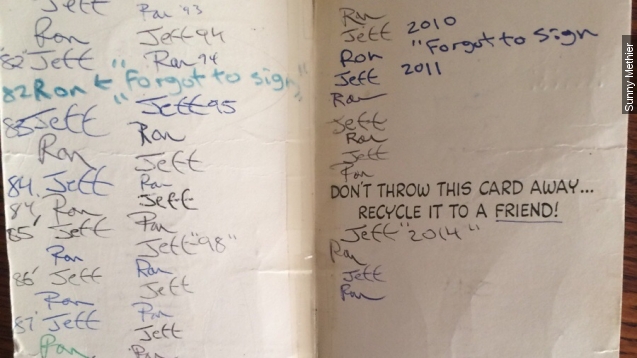 By Christine Slusser
July 3, 2015
Ron and Jeff Methier have been sending the same card back and forth for 40 years.
SHOW TRANSCRIPT

This looks like a cute, little vintage Peanuts card.

Open up the card and you see signatures of "Ron" and "Jeff" ... everywhere. There's a story, we promise.

A woman named Sunny shared this photo on the troll paradise website dedicated to making all cool things go viral ... aka Reddit.

She said her dad Jeff and uncle Ron have been sending the birthday card back and forth since 1973.

"Charlie Brown is not a quitter!"

Sooo, 42 years of awesome right there. But there was almost tragedy ... twice.

From the looks of the signatures, Ron, that rascal, forgot to sign the card in both 1982 and 2010. Good grief.

But really, this entire thing is as amusing as Lucy pulling the football from under Charlie Brown for the 100th time, because recycling the card was the entire point.

The front reads: "This is the age of ecology!" The inside then says: "Don't throw this card away, recycle it to a friend!"

Plus, Jeff got the card for Ron when he was going to college to be an environmental engineer, according to ABC.

And just think of how much money they've saved listening to that sage advice from Linus and not buying new cards.

Actually, let's figure it out, because math is fun ... right? The average cost of a birthday card in 2015 is $3. By today's standards, the brothers have saved $252 by recycling it for 84 birthdays.

They should probably go buy themselves something cool.

Like a Millennium Falcon rug ... or green tea Oreos.

What? Sounds cool to us.

​This video includes images from Sunny Methier, Ian Mackay / CC by NC 2.0, and music from Kevin MacLeod / CC BY 3.0.