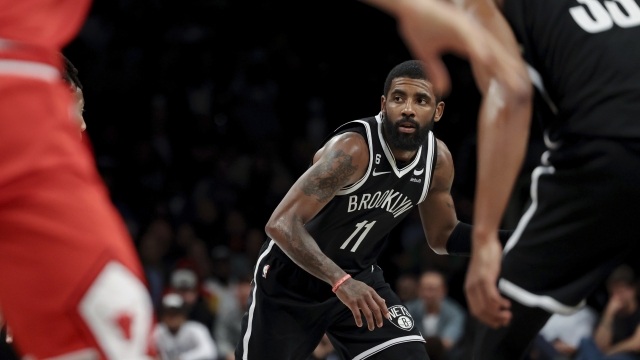 The Brooklyn Nets has suspended player Kyrie Irving for posting a link to a documentary containing antisemitic comments.

NBA All-Star player Kyrie Irving is facing severe backlash after posting a link to a documentary containing antisemtic comments, then refusing to apologize during a post-practice media session early Thursday.

Irving later took to Instagram to share a long-delayed apology, but that came after the Brooklyn Nets suspended the player without pay for at least five games and "until he satisfies a series of objective remedial measures that address the harmful impact of his conduct."

The Nets' decision caused a mix of reactions among New Yorkers — especially among basketball fans.

"I think they should have done something different because there are a lot of people out there putting other comments,  probably more negative than the comment he made, so I don't think that fair to him," said Oscar Rivera, a baskeball fan.

"Me personally, since I'm an NBA fan, I think he shouldn't be suspended because I know he didn't mean those kinds of words that he said," said Jesus Moret, a basketball fan.

"He has too much influence over people," said Margie Hollis, a New York City tourist. "When he says stuff like that, his followers listen. He could have apologized before; he apologized after they suspended him. So, I just think that was the right thing to do."

The Anti-Defamation League released a statement regarding Kyrie Irving's apology, saying, "This is an encouraging step from Kyrie. But actions speak louder than words. Because of his post and previous refusals to walk it back, the antisemitic film/book is now a best seller in multiple categories on Amazon. There is a lot more to do to undue this damage."

The Jewish non-governmental organization also said it will not accept any funds from Irving but that they're open to engage in a process of healing if the basketball player is open to direct dialogue to repair the harm that he has caused. Irving had attempted to make things right with a $500,000 donation to the ADL, but the organization rejected it.

"If he has an agreement with the organization itself, its in the organization's power to remove him if he has breached that agreement," said Jaydn Ovalles, a New York City resident. "Now when it comes to any outside actions out of the organization and him, there should be no consequences because that falls under free speech."

For the time being, Irving remains indefinitely suspended. It all comes amid the FBI's warning it had received "credible information" about a nonspecific but wide-scale threat to synagogues in New Jersey.