Broncos Owner Bowlen Steps Down, Reveals He Has Alzheimer's 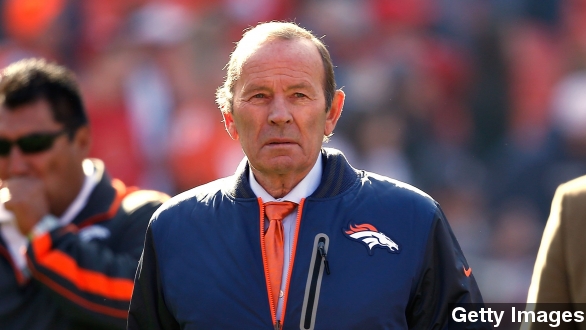 SMS
Broncos Owner Bowlen Steps Down, Reveals He Has Alzheimer's

By Erik Shute
July 23, 2014
After a 30-year career with the Denver Broncos, owner Pat Bowlen will officially step down as he makes public his battle with Alzheimer's disease.
SHOW TRANSCRIPT

​Two-time Super Bowl champion and Denver Broncos owner Pat Bowlen is stepping down as he battles Alzheimer's disease, according to the NFL. (Via Getty Images)

"Just a few minutes ago the team issuing a statement. In part, it reads: 'His contributions to the Broncos, the NFL and this community will continue to define their three decades of ownership and serve as the standard set for this franchise.' They intend to keep the team in the family, and they would not sell, but this is a big change." (Via KMGH)

Joe Ellis, the Broncos team president since 2011, will take over the Broncos' daily operations. He will also serve as the team's CEO and representative on all league matters. (Via Getty Images)

The Denver Post first reported on the story early Wednesday. In a statement to the newspaper, his wife, Annabel Bowlen, wrote:

"My husband, Pat, has very bravely and quietly battled Alzheimer's disease for the last few years. He has elected to keep his condition private because he has strongly believed, and often said, 'It's not about me.'"

However, several reports agree Bowlen's struggle has had its share of public spotlight since he first revealed to The Denver Post he suffered from short-term memory loss in 2009. Then, three years ago, he made the decision to stay on as owner but stopped day-to-day operations with the team. (Via Getty Images)

Now the question is: Will Bowlen's absence take a toll on the organization? Several in the media speculate the Broncos will be "business as usual" because of Bowlen's supporting cast, including Ellis and General Manager John Elway. (Via The New York Times)

"Just to give you insight as to who Pat is, he's always working out in the facility, always downstairs, Monday after games, checking in on injured players, checking on what he needed to do as an owner so we had the most competitive team out there." (Via ESPN)