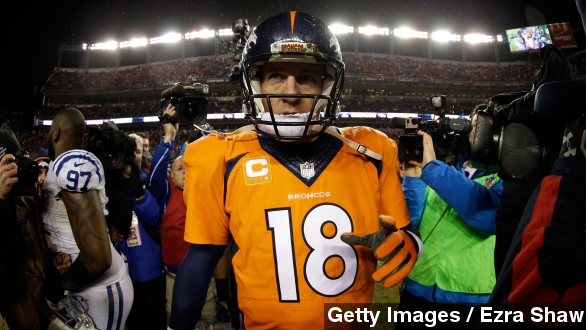 The Denver Broncos' Peyton Manning took on his old team Sunday night in the AFC playoffs. Manning just didn't look like his old self. That's because Peyton Manning is old.

Outlets around the nation are focusing less on the game, which the Indianapolis Colts won 24-13, and more on 38-year-old Manning's age, health and future ... or lack thereof.

These are just a few of the headlines: "The day Peyton Manning finally looked old," "A Torch Seemingly Passed," "Peyton Manning is done."

Judging from that, you'd guess Manning had a completely disastrous day.

While it certainly wasn't "Manning-like," it wasn't statistically awful. He completed 26 of 46 passes for 211 yards, threw one touchdown, no interceptions and lost a fumble.

But a writer for Deadspin called Manning's throws "inaccurate" and "rough" — a common sentiment from those watching the game.

"Peyton Manning is no longer at the very, very top of the NFL. ... Manning showed everyone today that it's time to find a new quarterback for the Broncos," said Colorado Springs Gazette columnist David Ramsey.

So why all the hate for the man who's been to 14 postseasons?

For starters, 14 postseasons have produced just one Super Bowl ring for Manning — in 2007 with the Colts. He owns an 11-13 combined record in the playoffs, making him the record holder for most postseason losses.

And maybe there's frustration of coming so close in Denver. It's the second time in three years since Manning's been on the Broncos that they've exited in the first round.

Expectations against the Colts were especially high coming into Sunday.

"A loss to the Colts would be considered a massive failure," said USA Today reporter Lindsay H. Jones.

Manning has already undergone four neck surgeries since 2011 and was battling a thigh injury Sunday. It's bringing many to question: Will Sunday's loss be the last game for the 38-year-old?