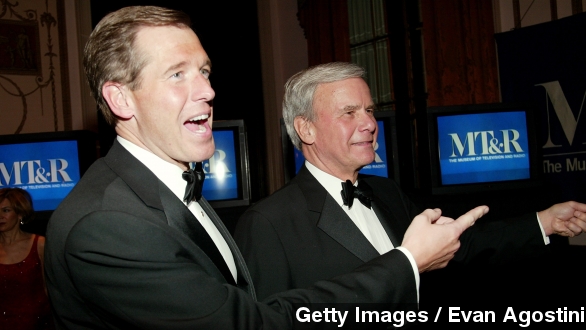 Anonymous sources at NBC have had a busy week since Brian Williams first came under fire for a story he told about his time in Iraq.

"I want to apologize. I said I was traveling in an aircraft that was hit by RPG fire. I was instead in a following aircraft," Brian Williams said on NBC Nightly News.

Williams has since put himself on leave, though it's not clear for how long or what NBC is going to do about the controversy. (Video via NBC)

Brokaw later denied that claim, telling The Huffington Post in an email: "I have neither demanded nor suggested Brian be fired. His future is up to Brian and NBC News executives."

It's not exactly a ringing endorsement for Williams, but neither is anything NBC executives have said about the situation, which is basically nothing.

But other anonymous sources at NBC, including an "NBC veteran," told Politico there's a lot of talking going on behind the scenes and Brokaw is "not shy about making his opinion known about these things."

Still, the lack of comment from NBC could simply speak to the difficult position the network is in: Obviously it wants a trustworthy anchor for its top-rated newscast, but there isn't exactly an obvious replacement for Williams.

Lester Holt has been deputized in Williams' absence, but talk of Holt replacing Williams full time has been limited.

In contrast with the silence from NBC leadership, Williams has received some very vocal support from his colleagues at MSNBC.

"When we get through the storm and the decision is made to judge what Brian Williams' future should be, that that decision should be based on the entirety of his career and not on one, or two or three mistakes," Joe Scarborough said.

In the meantime, Williams is staying off the air. He canceled an appearance on the Late Show with David Letterman scheduled for Thursday.