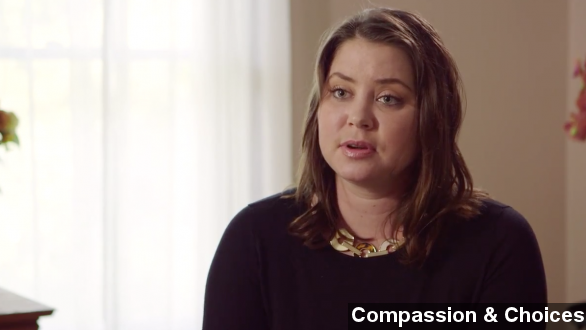 Maynard was diagnosed with a stage 4 glioblastoma last spring and told she had six months left to live. She then decided to move to Oregon with her husband and mother to utilize Oregon's Death with Dignity Act. (Video via Compassion & Choices)

She eventually started an online video campaign for Compassion & Choices with the intent of expanding death with dignity laws nationwide. A spokesman from that group confirmed her death Sunday evening.

Now, People quotes a post from Maynard's Facebook that reads: "Goodbye to all my dear friends and family that I love. Today is the day I have chosen to pass away with dignity in the face of my terminal illness, this terrible brain cancer that has taken so much from me … but would have taken so much more. ... Goodbye world. Spread good energy. Pay it forward!"

Brittany Maynard: "My goal of course is to influence this policy for positive change. I would like to see all Americans have access to the same healthcare rights."

Her movement started a conversation nationwide about dying in America and some media outlets point to a shift in national opinion.

A social medical expert writes in The Washington Post, "We are beginning to focus on what patients want, on their right to self-determination. And people are increasingly asking why anyone — the state, the medical profession, religious leaders — would presume to tell someone else that they must continue to die by inches, against their will."

Five states in the U.S. have legislation in place that allows physicians to help patients end their lives in some circumstances.