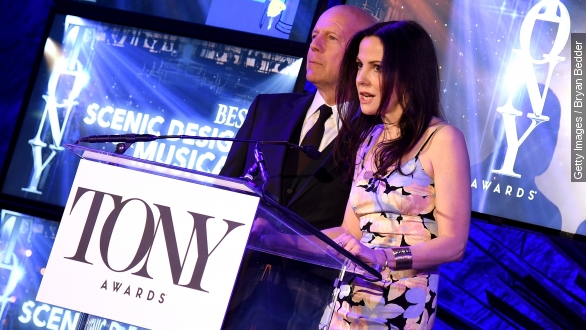 It's a British invasion — of Broadway, that is. The nominations for this year's Tony Awards were announced Tuesday morning, and plays from the U.K. topped the list.

For best play, "The Curious Incident of the Dog in the Night-Time" and "Wolf Hall Parts One & Two" were nominated. Both received critical acclaim in the U.K. before moving to New York.

These nominations aren't really surprising, seeing as those rave reviews continued here in the U.S.

Based on a 2003 mystery novel of the same name, a New York Post reviewer called "Curious Incident" "the most inventive new show on Broadway."

And The Los Angeles Times called "Wolf Hall," which revolves around Thomas Cromwell, the chief minister to King Henry VIII, "a thrilling high-stakes game ... full of politics, religion and enough sex and violence to satisfy the most depraved tastes."

Another Brit leading the pack is theater veteran Bill Nighy, who stars in the revival of the 1995 play "Skylight." Nighy was also nominated for best leading actor.

The current production of "Skylight," which premiered on the West End in London last year, was also nominated for best play revival and best leading actress in a play for British actress Carey Mulligan. (Video via Broadway.com)

Another big trend when it came to Tuesday's nominations was the number of seasoned actors who took a break from making movies to spend some time on a Broadway stage.

Besides Nighy and Mulligan, Bradley Cooper was nominated as best leading actor in a play for his role in "The Elephant Man." And Helen Mirren, Elisabeth Moss and Ruth Wilson filled the category for best leading actress in a play. (Video via CBS)

Patricia Clarkson received a nod for best featured actress in a play, which is the equivalent of best supporting actress at the Oscars.

And on the musical side of things, Ken Watanabe, perhaps best known for his role in the movie "Inception," was nominated for best leading actor in a musical for "The King and I." (Video via Lincoln Center Theater)

The Tony Awards will be presented June 7 live from the Radio City Music Hall in New York City.