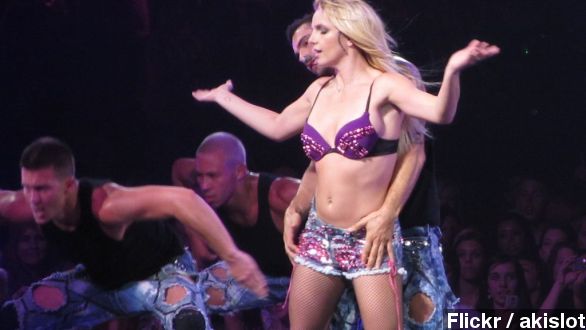 The pop princess is barely five months into a two-year residency at the Vegas casino – but the 90-minute extravaganza has been so popular, the hotel's asking Brit to "gimme, gimme more." (Via: YouTube )

New reports say Planet Hollywood's parent company, Caesars Entertainment, is working on a deal to keep a piece of the 32-year-old pop star through 2016. (Via: Planet Hollywood Las Vegas)

For just 30 additional performances, Time reports Spears will rake in a cool $12 million. That's on top of the $30 million she got for the first 100 concerts.

“She has been filling out the place every night, and she is enjoying it. ... You just didn't know what was going to happen. ... But the fans loved her. And she has so many fans from all over the world, that the support has been fantastic.”

Selesner did admit hiring Spears was a "gamble," but hey, it's Vegas.

And those fans he mentioned have been more than willing to shell out up to $300 to see the star lip-sync and gyrate through a 90-minute set.

Spears' manager, Larry Rudolph, told E! the residency is the "best-selling show in the history of Vegas" – VIP tickets for the first leg of shows sold out instantly.

We'd say Planet Hollywood's pretty lucky she's its star. Yes, that was a cheesy use of some Britney Spears lyrics.