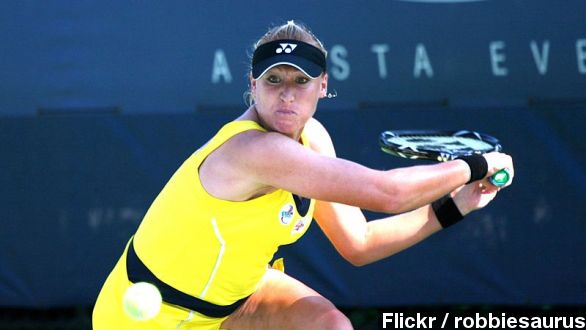 SMS
Retired British Tennis Star Elena Baltacha Dies At Age 30
By Alexis Rogers
By Alexis Rogers
May 4, 2014
Baltacha was diagnosed with liver cancer earlier this year. She retired in November and was recently married.
SHOW TRANSCRIPT

"Baltacha learned that she had cancer in mid-January, a couple months after retiring from professional tennis and just a few weeks after marrying." (Via BBC)

Baltacha had a successful career, climbing to number 49 in the world, despite being diagnosed with a chronic liver disease at age 19.

"She played 11 years representing great Britain. She was top 50 in the world…She was someone who made the third round in Wimbledon and the Australian Open a couple times as well." (Via Sky News)

A statement from her family read: "We are heartbroken beyond words at the loss of our beautiful, talented and determined Bally. … She was an amazing person and she touched so many people with her inspirational spirit, her warmth and her kindness." (Via The Telegraph)

Britain’s tennis association also praised her, saying: "Bally gave new meaning to the word 'fighter'. She fought tirelessly during her career against opposition on court and never gave in to the struggles she endured off it." (Via The Guardian)

After Baltacha’s diagnosis, her loved ones and friends in the tennis world  had organized a fundraiser called “Rally for Bally” that was scheduled for June.

Childhood friend Andy Murray was going to play, along with Martina Navratilova, and Tim Henman. The money would go to the Elena Baltacha Academy of Tennis and the Royal Marsden Cancer Charity. (Via JustGiving)

The event will go forward following Baltacha’s death, but will now be held in her memory. (Via Twitter / @RomiCvitkovic)