British Pollsters Were Way Off; Do 'Shy Tories' Explain Why? 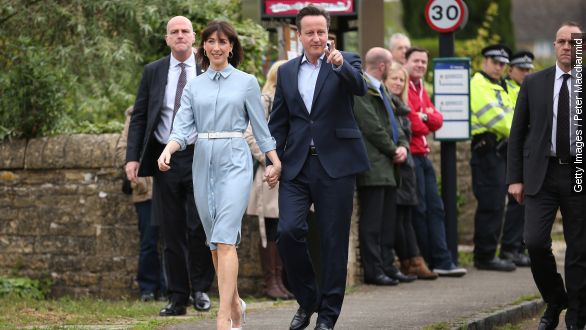 Despite pre-election polling pointing to a neck-and-neck race, the U.K.'s Conservative Party won with a clear victory. Why were the polls so wrong?

These were the front pages heading into Thursday's election — all predicting a dead heat between David Cameron's Conservative Party and Ed Miliband's Labour Party.

"David Cameron, against all predictions, led his party to an outright victory," a BBC anchor said.

... a victory practically no one saw coming.

Sure, it's possible some voters changed their minds at the last minute. But the so-called "Shy Tory" factor might be a more probable explanation for the surprise outcome. (Video via Conservative Party)

At least that was the case in 1992. All the pre-election polling predicted a win for Labour. (Video via BBC)

"The opinion polls in tomorrow's paper mainly indicate that Labour is in the lead," one BBC anchor said.

"Labour leads the field as they entered the final stretch," another reported.

That same phenomenon might be at least partially to blame for flawed forecasts in other recent, high-profile elections.

Just look at what happened in Israel earlier this year. Polls had predicted Benjamin Netanyahu's conservative Likud party would win at most 22 seats in the Knesset. They actually won 30. (Video via ODN)

And although there was no question Republicans would take back the Senate during the 2014 midterms, the polls underestimated by how much. (Video via Mitch McConnell for Senate, Cory Gardner for Senate)

It's impossible to know for sure what happened in each of those cases, but FiveThirtyEight — whose own calculations were way off Thursday — says the polling industry's methodologies aren't working like they used to.

So, that cliche we hear so often …

"There's only one opinion poll that counts, and that's the one on election day," Cameron said.

… at least this time, rang true. (Video via Channel 4)