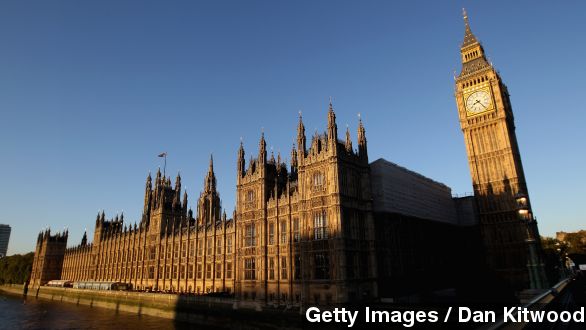 SMS
U.K. Passes Historic Vote On 3-Parent DNA Baby Procedure
By Jake Godin
By Jake Godin
February 3, 2015
The British Parliament is set to vote on whether procedures involving three parents will be allowed in the United Kingdom.
SHOW TRANSCRIPT

On Tuesday, members of the British parliament set their country on the path to making history by passing an amendment that will allow children to have not two, but three parents.

You may be wondering how that’s even possible. Essentially, doctors can now perform a procedure that will replace a mother’s mitochondrial DNA, or mDNA, with that of a second mother.

The goal is to avoid mothers passing on a wide range of debilitating diseases to their children through faulty mitochondria. (Video via Wellcome Trust)

Allowing three-parent babies will help ensure fewer people have to grow up with lifelong and crippling diseases that stem from a mother’s faulty mDNA. But this wasn’t exactly a straightforward vote.

British MPs in the House of Commons were allowed a “free vote” when voting on the issue, meaning they didn’t have to vote down party lines since this was considered an issue of conscience.

But they faced pressure from both sides of the issue. Those who wanted to allow three-parent babies were interested in preventing mitochondrial diseases for future generations.

“This is world leading science within a highly respected regulated regime and for the many families affected, this is light at the end of a very dark tunnel.” Public Health Minister Jane Ellison told parliament.

Those who were against it largely opposed the measure for ethical reasons and said there wasn’t enough evidence to support whether the procedure was safe or not.

Speaking to The Telegraph, the program director at Bioethics and Medical Law at St. Mary’s University said, “Even if these babies are born they will have to be monitored all their lives, and their children will have to be as well.”

The Church of England, while open to the idea of altering embryos to help children, had came out against the procedure as well saying it would not be responsible. They were also opposed to the idea of destroying the unused embryo from the mDNA donor mother.

Now the vote will go to Britain’s House of Lords. If it passes there, the U.K. will become the first country to allow the mDNA procedure and the first baby could be born as soon as next year.