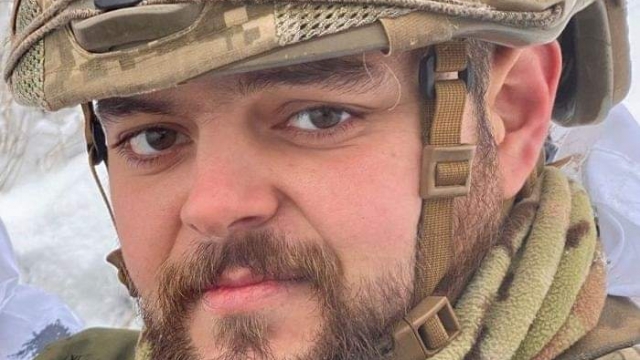 SMS
British Man Fighting In Ukraine Feared Captured By Russian Troops
By Jason Bellini
By Jason Bellini
April 14, 2022
In a Russian propaganda network broadcast, Aiden Aslin is asked if he killed anyone or saw anyone being killed. He also appears to have been beaten.

It's an image Western leaders feared they'd eventually see — a Russian propaganda network broadcast a video of a captured citizen of a NATO country.

Aiden Aslin, who is British, was asked if he killed anyone or saw anyone being killed.

ASLIN: I didn't do any fighting.

Former U.S. Army medic Brennan Phillips says his friend, who he met in Syria in 2018, joined a Ukrainian Marine unit deployed to Mariupol. It's a city that, according to Ukrainian officials, is 90% destroyed with Ukraine fighting to the last soldier. Phillips says he last spoke to his friend Monday.

"The first thing he said was, 'We're surrendering to the Russians,'" Phillips said. "And I said, 'No, no, no, no, no. You can't do that. You can't do that. Have you thought about this? Have you thought about that?' He's like, 'No, you know, we tried. There's nothing we can do. We have no more ammunition, we have no food, we have no water. There's just — we're completely encircled that we can't get out and escape.'"

ASLIN: We've already tried that route. We literally ran out of ammunition. We haven't got any ammunition left...

The line drops. And Phillips' attempts to call back were unsuccessful. The chief spokesperson for the Russian Defense Ministry says "in the course of the Liberation of Mairupol Operation, 134 more Ukrainian servicemen voluntarily put down their arms and surrendered during the night." He identified them as being from Ukraine's 36th Marine Brigade, which Aslin volunteered with.

"After I spoke with him, he was able to get a few more texts through, apparently before the exchange happened — before the Russians captured him," Phillips said. "His last message to me was, 'Please don't let them forget about me.'"

British Parliament Member Robert Jenrick — Aslin's representative in parliament — tweeted: "I am working with ⁦@FCDOGovUK⁩ to track the whereabouts and secure the release of my constituent, Aiden Aslin. Aiden chose to risk his life because he believes passionately in the Ukrainian people's right to live in freedom and democracy."

Using images of prisoners of war for propaganda violates the Geneva Convention.