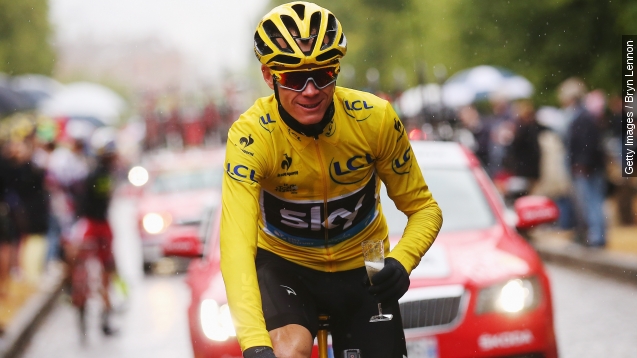 British cyclist Chris Froome is the 2015 Tour de France winner after weeks of dominating the rest of the field.

The cyclists battled through heavy rain, wet roads and temperatures in the 60s during what's commonly referred to as the ceremonial final stage on the Champs-Elysees.

Froome really broke away from the field in the 10th stage. He was able to hold off Colombian Nairo Quintana, who made a strong push in the later stages.

The final day got off to a bit of an odd start as French police opened fire on a car after it rammed a race barricade. The car drove away and race officials say terrorism is not suspected as a motive. No injuries were reported.

Froome, who also won the 2013 Tour de France, hasn't been able to escape doping allegations that have muddled the sport for years. Froome says in an early stage of this year's race, a spectator threw a cup of urine at him, and The New York Times reports his dominance has prompted "unsubstantiated allegations" he was doping.

"It's something that falls on my shoulders now, to change the image of the past," Froome told Sky News.

But fans are having a tough time forgetting Lance Armstrong, the seven-time Tour de France winner who's since had his wins stripped after admitting to doping.

"Did you ever blood dope or use blood transfusions to enhance your cycling performance?" Oprah Winfrey asked.

Froome says he's open to further testing after the race as proof he's clean. He is now the 20th cyclist to win the Tour de France multiple times.

This video contains images from Getty Images and music from Aviscerall / CC BY NC 4.0.