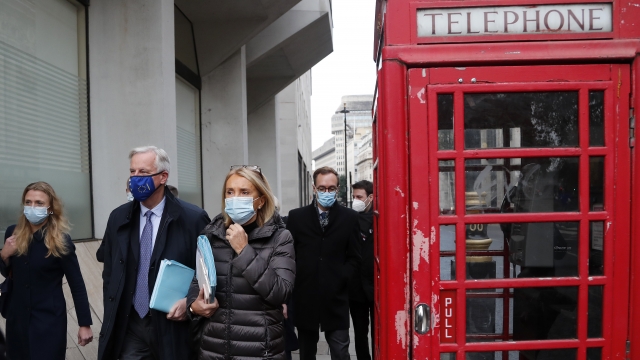 SMS
Britain, EU Scramble For A Deal Weeks Before Brexit Transition Ends
By Bailey Vogt
By Bailey Vogt
November 28, 2020
Fears mount over disruption to European trade and financial markets if no deal is reached.
SHOW TRANSCRIPT

Britain and the European Union resumed Brexit talks Saturday — attempting to secure a trade deal before the transition period ends.

The two negotiators resumed face to face talks — hoping to avoid a "no-deal" divorce as Britain breaks away from the E.U.

If no deal is reached, the fallout could rock financial markets — already hard hit by the COVID-19 pandemic. Fears mount that a failure in negotiations may gridlock traffic at national borders and disrupt Europe's supply chains.

Reuters reported the main aspects holding up an agreement include "fishing, state aid and how to resolve any future disputes."

Britain officially separated from the European Union last January after three and a half years of negotiations. There's wiggle room to extend the transition period by one or two years "if both sides agree."