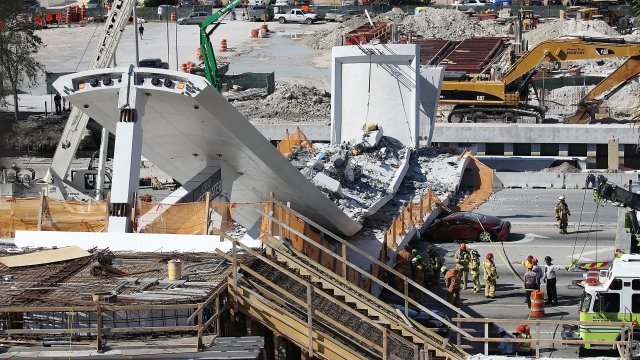 At least six people were killed after a 950-ton pedestrian bridge at Florida International University in Miami collapsed Thursday, crushing a number of cars underneath.

Emergency crews worked through the night, searching for possible victims. Police say at least nine people were transported to hospitals.

The bridge was still under construction and planned to be finished in 2019. The so-called "instant bridge" had been rapidly installed in just hours Saturday after being built nearby.

U.S. Sen. Marco Rubio posted on Twitter that the bridge's suspension cables were being tightened Thursday when it collapsed.

The National Transportation Safety Board is starting its investigation into the collapse Friday, and Florida Gov. Rick Scott said any wrongdoers would be held accountable.

According to the university, once finished, the $14.2 million bridge was designed to withstand a Category 5 hurricane and last for more than 100 years.