Bride's Sisters Have Everyone Laughing With Toast 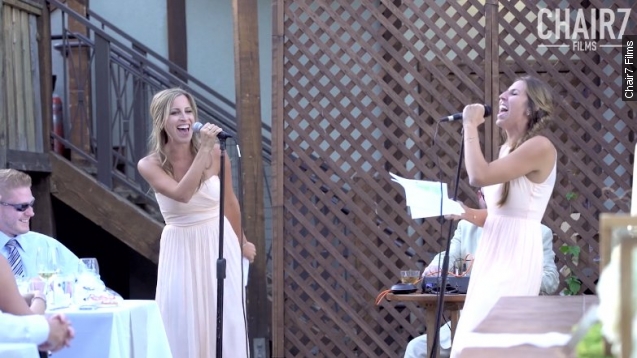 SMS
Bride's Sisters Have Everyone Laughing With Toast
By Katherine Biek
By Katherine Biek
July 17, 2015
Maddie and Kelsey Hallerman's musical toast to their sister on her big day was a hit with the bride, guests and now with the Internet.
SHOW TRANSCRIPT

"We've been living in your shadow, but it's time for us to step into the spotlight," Kelsey Hallerman said.

"We don't always live in your shadow," Maddie Hallerman said.

Meet Kelsey and Maddie Hallerman. Last month, they were the co-maids of honor at their sister Caitlin's wedding and brought the house down with their music-filled toast.

"You guys, my voice is not good. Don't worry," Maddie said.

"We're not good ... Love is the reason we're all here. That's what you're postin' for," Kelsey said.

"Now you're never gonna be lonely. You're with the best guy of all time," the sisters sang together.

And if you thought the sisters were going to end it after singing their version of "Give Me One Reason," think again.

"Then Johnny picked you from the bunch. One glance was all it took," Maddie sang.

"Now you're married, and no one can take a second look," Kelsey sang.

A Nevada film company, Chair7 Films, was on hand to capture the more-than-five-minute-long toast, which also included renditions of "Everybody" from the Backstreet Boys and "Black or White" from Michael Jackson.

To finish things off, Kelsey and Maddie dug deep and pulled out their inner gospel singers for their version of "O Happy Day."

The bride and groom were clearly loving the toast, cracking up throughout the entire performance. Caitlin was even spotted wiping a tear from her eye when it was all over.

We have to agree with BuzzFeed, which called it "the most epic wedding toast song."

The cinematographer from Chair7 Films told us that no one knew prior to the reception that the sisters were going to be performing, and that Kelsey and Maddie had every guest laughing.

To watch the entire wedding toast, head on over to the film company's Vimeo page and check it out.