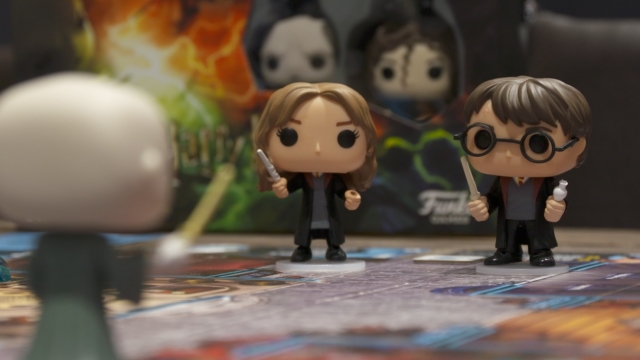 SMS
Brick-And-Mortar Stores Are Still Vital — To The Collectibles Industry
By Casey Mendoza
By Casey Mendoza
August 16, 2019
"We do fifty events around the world to connect with our fans. I think that's what makes us very unique from different companies that do our space."
SHOW TRANSCRIPT

"I have a lot of toys. Most of them are Funko. I have a lovely Yoda.""This is Jon Snow.""This is Rocket Raccoon from 'Guardians of the Galaxy.'""He is my Funko friend.""And a Chewbacca.""And I love him."

With more than 150 million Funko Pops sold all over the world last year, the pop culture figurines with their big heads and small bodies are the most popular collectible on the planet.

"All that's being fueled by content, and that's kind of morphed our company's growth as well. As the content came out, and it was more and more consumed, we were leveraging more and more of that and connecting amazing licensing content with their fan bases and then providing retail solutions to people all over the world."

That's Brian Mariotti, CEO of Funko and professional nerd. ["Luke, I am your father."] He took lead of the company back in 2005, and since then, the company's digital footprint has skyrocketed.On Amazon alone, individual search pages for keywords like "funko pops" can bring in $30,000 in monthly revenue, according to data compiled by Helium 10. That number doesn't take into account more specific search pages for franchises like "The Office," the Marvel Cinematic Universe or Harry Potter — each of which also garner tens of thousands of dollars in monthly revenue.

Funko, and other pop culture merchandisers like it, use online marketplaces and social media to their advantage. But even in the age of struggling brick-and-mortar stores, the collectibles industry still leans heavily on physical marketplaces.

"I got all of them from Barnes & Noble, because I had a gift card from my mom.""My favorite is T'Challa, which I impulse bought at a store. I think I was supposed to be buying soap. ...This is what I got instead."

Before it closed in 2017, Funko says Toys "R" Us accounted for 3.4% of the company's sales that year. Store closings like that pose big risks to the industry, but other retail outlets have actually restructured their businesses to include more pop culture merchandise. In 2017, the video game retailer GameStop rolled out a concept store that devoted half its inventory to merchandise and collectibles — the company predicted that by 2019, the market would exceed $16 billion. GameStop reported $150 million in revenue from collectibles this quarter, which partially offset declines in video game and console sales. Beyond brick-and-mortar stores, pop culture merchandisers are also able to thrive on the foot traffic of conventions.

"We do fifty events around the world to connect with our fans. I think that's what makes us very unique from different companies that do our space. We are all about fan interaction and fan service, and that's because we're all fans."

Later this year, Funko is opening up a 40,000 square foot retail space in Hollywood — a move similar to LEGO, Nintendo or the South Korean character company LINE FRIENDS.The latter company, which started in 2011 as a group of characters on an online messaging app, has been operating more than 150 stores as of this summer. Its own Hollywood store drew more than 18,000 visitors in its opening weekend.