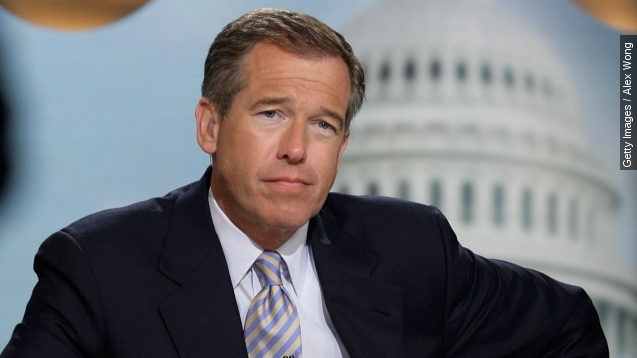 Brian Williams will be back in the anchor chair Tuesday, leading MSNBC's coverage of the pope's visit to America and then moving to a "breaking news" anchor role. (Video via NBC)

It will be the first time since February that Williams has been on TV in any official news capacity. (Video via NBC)

He was suspended for six months after an NBC investigation found he had lied almost a dozen times about his role while covering stories like the Iraq War. (Video via CNN)

"I said things that weren't true. Looking back, that's plain. It had to have been ego that made me think I had to be sharper, funnier, quicker than anyone else," Williams told Matt Lauer on "Today."

His road to redemption hasn't been completely smooth. After an interview with Matt Lauer aired, one Variety columnist wrote, "It will be a relief when he can stop talking about himself, since introspection is clearly not his forte."

Williams' breaking news job is a smaller role than we've seen him in before, and it comes as MSNBC is making changes. The network is shifting its midday programming to hard news coverage and canceling some of its liberal-leaning opinion programs. (Video via NBC)

"In case you hadn't heard, MSNBC has made it official: They have canceled 'The Ed Show' and I will no longer be hosting 'The Ed Show' or any show on MSNBC," Ed Schultz told viewers after his show was cancelled.

The decision to have Williams anchor without a dedicated time slot is probably a good call for MSNBC. It's a way to use Williams' breaking news chops while testing whether viewers still trust him.