The Brexit Deadline Approaches, And A Delay Seems Unlikely 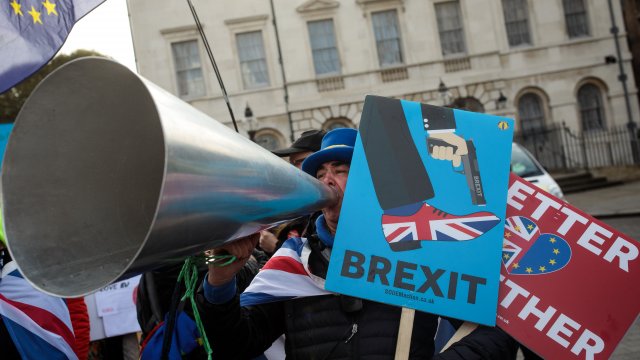 SMS
The Brexit Deadline Approaches, And A Delay Seems Unlikely
By Matt Picht
By Matt Picht
February 14, 2019
With the Brexit deadline approaching and no clean deal in site, the U.K. might have to choose between a no-deal exit or pushing for a delay.
SHOW TRANSCRIPT

Brexit officially happens in just over one month, and the U.K. still can't agree on specific terms for leaving the European Union. If the country wants to avoid a chaotic no-deal Brexit, it might have to stall for time.

U.K. Prime Minister Theresa May just lost another attempt to unify Parliament behind her new Brexit negotiations with the E.U. May's critics argue she's forcing the country to choose between her approach and a no-deal Brexit.

Opposition leader Jeremy Corbyn said after the vote: "She cannot keep on just running down the clock and hoping that something will turn up."

The Brexit date of March 29 isn't set in stone — but pushing it back would require a vote in the U.K. and the E.U. parliaments. And there might not be enough political will around to drag out Brexit for much longer.

Hardcore Brexit supporters in the U.K. worry delaying Brexit could lead to it being called off outright. They'd rather face a no deal than risk a delay — a faction of Brexiteers sunk May's plan to rule out a no-deal Brexit.

And the U.K.'s uncertain membership status is causing headaches in the E.U. as well. The European Union is holding parliamentary elections in May — if the U.K.'s not out by then, it'll have to occupy seats that are already planned to go to other member states.

The Brexit process itself has been weighing down the U.K. economy, as businesses try to plan for an uncertain future. Extending the process without any clarity could just serve to drag the country down even further.

Of course, May still has the authority to rip up her Article 50 Brexit declaration and call off the whole process — but doing so would violate the results of the 2016 Brexit referendum. The U.K. government seems more likely to crash out of the E.U. without a deal than risk doing that.