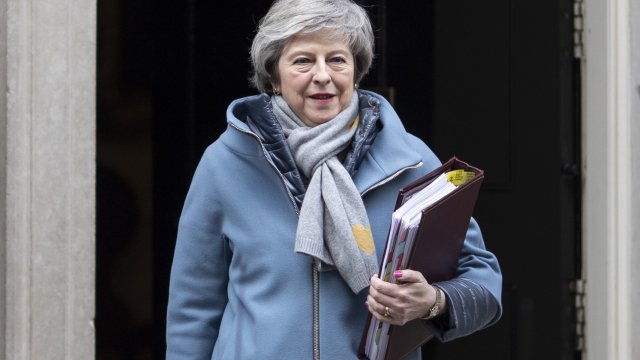 SMS
Theresa May's Brexit Deal Faces Judgment From Parliament
By Matt Picht
By Matt Picht
January 10, 2019
After weeks of delay, the U.K. Parliament is set to vote on whether to approve a deal to manage the U.K.'s exit from the European Union.
SHOW TRANSCRIPT

New year, same old predicament: U.K. Prime Minister Theresa May is still having trouble getting her Brexit deal through Parliament.

The agreement on withdrawing from the European Union was supposed to come up for a vote in Parliament last year. But May rescheduled that vote when it looked like the deal was heading for certain defeat.

Amanda Sloat, a senior fellow at the Brookings Institution, told Newsy: "In many ways the last couple of weeks have simply delayed the inevitable, since it seems very likely that Theresa May is going to lose this vote. The parliamentary math does not seem to have changed significantly since before the holidays."

The withdrawal deal has run aground in the U.K. over how it handles the post-Brexit border between Northern Ireland and Ireland. And assurances from the EU that the border solution in the deal will only be temporary seemingly haven't won over any skeptics.

Members of Parliament forecast a grim showing for the deal. Ahead of the vote, members passed an amendment giving May three days to come up with an alternative deal if her plan is rejected in Parliament. A separate amendment would hamstring the U.K. government's tax powers if the U.K. leaves the European Union without a deal.

Sloat said: "Both of these amendments by the Parliament are an attempt by the House of Commons to try and exert more control over the policy process from what the U.K. government has. The challenge is that there's currently no majority for any form of deal, and this is essentially Westminster politicking that doesn't take into account the political and legal realities on the part of the European Union."

The EU has been firm that the deal cannot be renegotiated, which means May's effectively presenting Parliament with a choice between her way or a potentially disastrous no-deal Brexit.

If May's deal does get shot down, it could trigger a push for new elections or even a second referendum on Brexit. The U.K.'s scheduled to leave the EU on March 29, and the current deadlock isn't giving the EU a lot of motivation to extend the deadline.

Sloat said: "That would require an agreement from all 27 member states, and they're only likely to do that if there's a compelling reason in the U.K., such as a second election, a second referendum or more time that's needed to implement. They are unlikely to give an extension because there is continued churn in London."