May's Exit Leaves UK At A Crossroads On Brexit And Trump 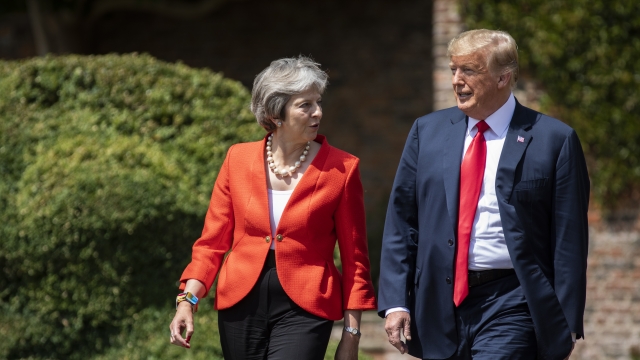 SMS
May's Exit Leaves UK At A Crossroads On Brexit And Trump
By Matt Picht
By Matt Picht
May 28, 2019
The U.K.'s next prime minister won't just be managing Brexit — they'll also have to cultivate new ties with the U.S. and President Trump.
SHOW TRANSCRIPT

The U.K. is hunting for a new prime minister after Theresa May announced her resignation. Whoever takes her place will have to forge a new relationship with President Trump.

This isn't just about personal chemistry: The U.S. has proffered a potential free-trade agreement between the two countries once the U.K. leaves the EU. But when and how Brexit actually happens could have a big impact on what the U.K.'s future with the U.S. and President Trump looks like.

President Trump is likely to get along well with the candidates who share his hard-line views on Brexit. The current front-runner in that camp, former Foreign Secretary Boris Johnson, already has the president's seal of approval: President Trump said last year Johnson would make a "great prime minister."

But the U.K. might also opt for a leader who supports the current, more moderate approach to Brexit. Chief among that group is current Foreign Secretary Jeremy Hunt, who has likened a no-deal Brexit to "political suicide" and has tangled with President Trump on Twitter in the past.

Whoever wins the leadership contest will have just a few months to negotiate the U.K.'s exit from the EU before the current deadline of Oct. 31.