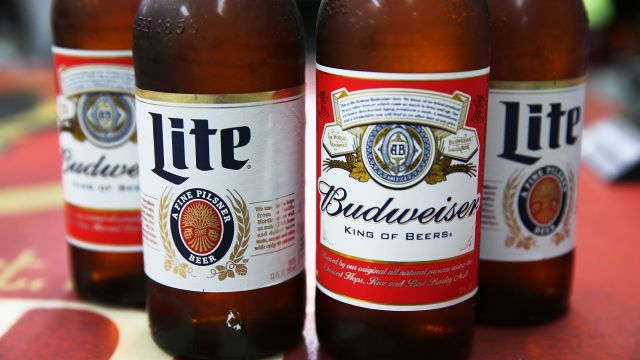 Small-time brewers are fighting to stop the birth of a potential monopoly.

The Justice Department is reportedly close to approving Anheuser-Busch InBev's acquisition of SABMiller.

AB InBev and SABMiller are currently the world's No. 1 and No. 2 leading brewers, respectively. Some reports suggest their $107 billion merger could be OK'd before the end of June.

But the Brewers Association, which represents 2,800 craft brewers, argues the merger threatens other brewers' ability to compete in a fair market.

In most states, brewers aren't allowed to sell their own products. They have to rely on distributors that then sell to the retailers we buy from — bars, restaurants and liquor stores.

The thing that really makes the competition nervous is AB InBev is also America's largest beer distributor, thanks to some state laws that allow brewers to also be a distributor for their own products. AB InBev already has ahold of almost half of the domestic market, including brands like Budweiser, Busch and Corona.

Local brewers argue the conflict of interest allows AB InBev to ice them out of distribution opportunities. Mainly because AB InBev has the resources to incentivize distributors who agree to pick up their brands over others.

One incentive, introduced last November, reimburses distributors up to $1.5 million if 98 percent of their beers come from AB InBev. Another incentive rewards cooperative distributors with extra marketing support.

In December, the president of a St. Louis brewer said he recently dropped a craft brewer because he "had to make a choice to go with the incentive program or stay with craft."

The Brewers Association wants lawmakers to force AB InBev to divest the wholesalers it owns and create new distributor incentives that encourage the sale of competing beers.

According to The Wall Street Journal, shipments of craft beers are up nearly 174 percent since 2005. Shipments for AB InBev have fallen by almost 6 percent in the same timespan.

This video contains clips from Videoblocks and images from Getty Images, The Brewers Association and The Wall Street Journal.