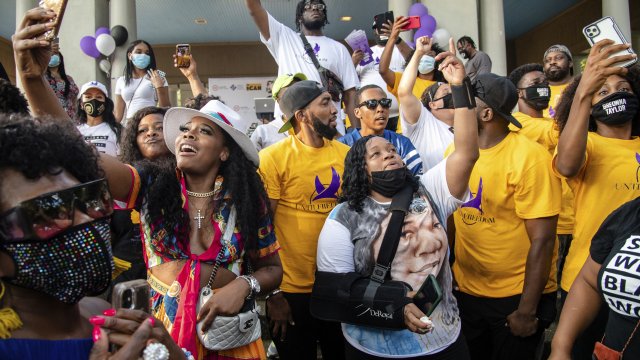 A multi-day convention honoring Breonna Taylor in Louisville is expected to wrap up Tuesday with a march to the Kentucky city's police training academy.

Over the weekend, the gathering dubbed "Breonna-Con" featured workshops, empowerment programs and a community barbecue. It was started by the New York-based social justice organization Until Freedom. The Louisville Courier reported more than 20 armed counterprotestors gathered in a nearby parking lot... some wearing “thin blue line” logos.

The goal of the gathering was to uplift residents while spreading awareness about Taylor, who was fatally shot by police in her home in March while they were serving a no-knock narcotics warrant.

Organizers of Breonna-Con say Taylor's mother wants "her daughter to be associated, not just with the murder, but with something positive, something that uplifts women in the community." The four-day event also featured families of Taylor, George Floyd, Trayvon Martin and the families of Black people killed in police shootings.

For Tuesday's march in Louisville, police are requiring all officers to work as a large crowd is expected.