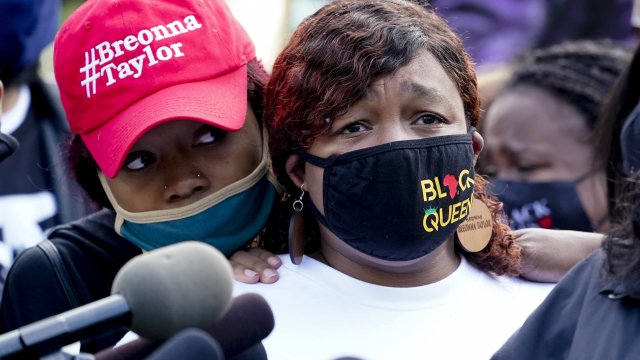 Two days after Kentucky Attorney General Daniel Cameron announced there would be no charges filed for the killing of Breonna Taylor, Taylor's family and their attorneys and supporters voiced their frustration in downtown Louisville.

CRUMP: "If you want us to accept the results then, release the transcripts!"

BAKER: "Answer that question, head on. Was it your office's decision? Or was it the grand jury's decision. Release the transcript."

Former Louisville police officer Brett Hankison was charged with three counts of wanton endangerment for shooting blindly and potentially injuring the family that lived next door to Taylor. The other two officers involved in the shooting, Myles Cosgrove and Jon Mattingly, were not charged.

During Friday’s press conference, most of the anger was directed toward Cameron, who conducted the investigation and presented evidence to a grand jury.

Cameron has refused to release any evidence publicly, because he says it could jeopardize the FBI's ongoing investigation into potential civil rights charges.

The list of people calling for him to release this information is growing — Kentucky's governor, Louisville's mayor and the former Kentucky assistant attorney general have all urged Cameron to release the evidence he presented to the grand jury.

FISCHER: "What we are doing is working with the attorney general and the FBI to understand what we can release so it doesn't interfere with any of the ongoing investigations. What we want to do is get as much of this information out as soon as we can."

Also at the press conference -- Jacob Blake's father. Jacob Blake was shot in the back seven times by police in Kenosha, Wisconsin after walking away from officers and leaning into his vehicle. Blake survived but is paralyzed from the waist down.

Protesters in Louisville say they will continue to protest in the coming days and are demanding officers Cosgrove and Mattingly be fired.

MALLORY: "And we are not going home, we are going to make this city as uncomfortable as it can be and we intend to travel across the state of Kentucky and make sure that in every corner of this state they know who you are Daniel Cameron."