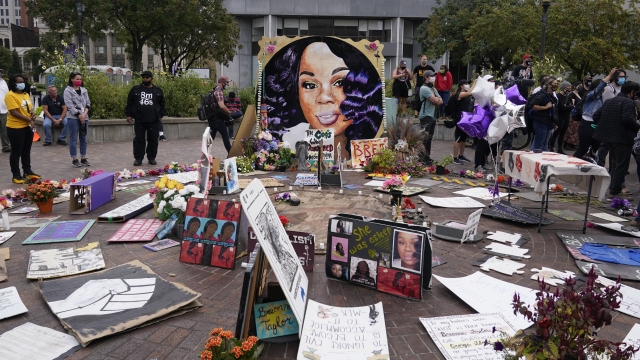 Police said they knocked multiple times and identified themselves as police, but Taylor's boyfriend said he didn't hear them identify themselves.

Grand jury recordings in the Breonna Taylor case were publicly released Friday after being put on hold to remove the personal information of witnesses.

In a statement, Kentucky Attorney General Daniel Cameron said: "I'm confident that once the public listens to the recordings, they will see that our team presented a thorough case to the Jefferson County Grand Jury."

Earlier this week, Cameron said he didn't recommend murder charges because the officer's actions were justified since Taylor’s boyfriend, Kenneth Walker, shot at officers first. Walker has said he thought someone was breaking in.

According to the recordings, which are roughly 15 hours long, police say they knocked on the door multiple times and identified themselves as police before breaking into Taylor’s apartment. Walker said he didn't hear them identify themselves.

Two neighbors featured on the recordings said they didn't hear police officers knocking before they broke in.

In an interview played for a grand jury, Walker said an officer told him he was going to jail for the rest of his life.

"And he asked me, 'Were you hit with any bullets?' I said no. He said, 'That’s unfortunate.' Exact words," Walker said.

In the recordings, we also hear from former Louisville Police Officer Brett Hankison. A grand jury charged Hankison with three counts of wanton endangerment for shooting into a neighbor’s apartment. He said he was supposed to be off work that day but volunteered to come in. He also said he didn’t know anything about the investigation beforehand.

"I was afraid and it was a super helpless feeling knowing that I had a handgun and this guy had a AR-15," Hankison said.

Walker was armed with a nine millimeter handgun, not an AR-15.

Recordings like this are almost never released. The release comes after an anonymous juror filed an initial motion with the court requesting the grand jury proceedings be released. The motion said Cameron mischaracterized the jury's position.

Louisville police entered Taylor’s apartment in March, looking for drugs or money. They had a “no-knock” warrant. No drugs were found in Taylor's home.

Cameron has been criticized for not presenting evidence against two of the officers involved.

Juror deliberations and prosecutor recommendations and statements were not recorded. Cameron says that's because "they are not evidence."

The NAACP Legal Defense and Educational Fund says it will review the recordings and release an assessment of the case "in the near future."