Brennan Says Trump Is Trying To Scare His Critics Into Silence 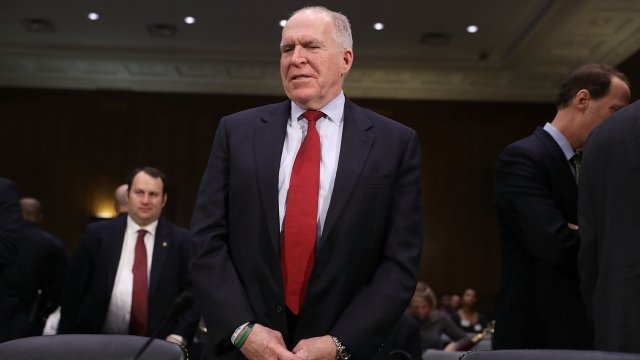 The former CIA director's security clearance was revoked Wednesday by the president.

Former CIA Director John Brennan fired back at President Donald Trump for revoking his security clearance in an op-ed published Thursday in The New York Times.

In it, Brennan said the president's decision was "politically motivated" and "an attempt to scare into silence others who might dare to challenge him."

Brennan also wrote that Trump's repeated claim about there being no collusion between his campaign and Russia is "hogwash."

The former head of the CIA has been a very vocal critic of President Trump, often responding to the president on Twitter.

In a statement relayed by White House press secretary Sarah Sanders on Wednesday, Trump said Brennan had "leveraged" his security clearance to make "wild outbursts" about the administration.

Trump also said Brennan — who served as CIA director from 2013 to 2017 — "has a history that calls into question his objectivity and credibility."

However, in an interview with the Wall Street Journal on Wednesday, the president said the ongoing investigation into possible Russia collusion in the 2016 election was the reason behind his decision to revoke Brennan's clearance.

He said, "I call it the rigged witch hunt, it is a sham. And these people led it. ... So I think it's something that had to be done."

The White House is still considering revoking security clearances for a number of other former intelligence officials, most of whom have also been critical of President Trump.