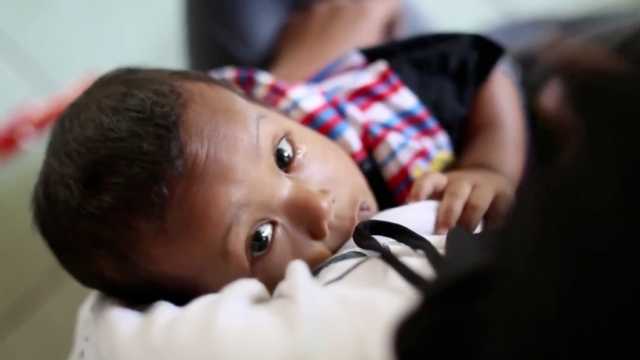 SMS
Breastfeeding Is Really Good For Babies, But Millions Can't Do It
By Melissa Prax
By Melissa Prax
July 31, 2016
UNICEF wants women to breastfeed their babies because it's like a first vaccine, but that can be difficult for HIV-positive mothers.
SHOW TRANSCRIPT

Breastfeeding shortly after a baby is born could mean life or death. The chance of a baby dying goes up by 80 percent within their first month of life if they're not breastfed in the first 24 hours.

That's why UNICEF wants women to breastfeed their children shortly after they're born, but for millions of women that's not possible.

That's because if a woman has HIV she could spread the disease to her baby through breastfeeding.

Which means her baby might miss out on a "first vaccine" — the nutrients and antibodies passed from mother to baby through breastfeeding are most effective within the first hour of birth.

If HIV-positive women take certain antiretroviral drugs — not only through pregnancy but through breastfeeding — they can dramatically cut the chances of their baby getting HIV.

"My hope is that my son would grow up, that he would tell his friends and other people he meets that: 'My mother was HIV-positive and I am HIV-negative. She took treatment and protected me," a South African mother said.

Breastfeeding can be a simple way for mothers — especially in developing countries — to save money and offer better nutrition as their babies grow.