Breast-Feeding Mom Shares Moment With Orangutan At The Zoo 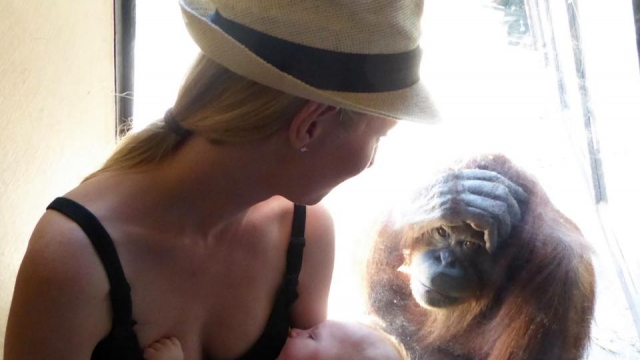 SMS
Breast-Feeding Mom Shares Moment With Orangutan At The Zoo
By Samantha Crook
By Samantha Crook
February 13, 2016
As a woman breast-fed her infant son at the Melbourne Zoo, a female orangutan approached them.
SHOW TRANSCRIPT

A mom shared a tender moment with an orangutan at the Melbourne Zoo.

Elizabeth Hunt Burrett was at the zoo when her infant son got hungry. She sat in a corner to breast-feed, and that's when a female orangutan came over to investigate.

"I felt so proud. And I felt like she was proud of me. Yeah, I don't know; it was just amazing," Burrett told ABC Australia.

The zoo says it breeds orangutans because they're endangered. It also said it designed the enclosure "for a satisfying encounter on both sides of the glass." Which it sounds like Burrett can definitely speak to that.

After the powerful moment, Burrett told ABC Australia she and the rest of the family are now members of the zoo.

This video includes a clip from Zoos Victoria.